Project Cougar - Maybe She Should Run The NYCDOE? 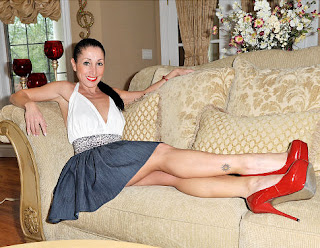 The arrest of the tech consultant that the NYCDOE had hired to provide Internet access to schools is the scandal that just keeps on giving.

Bloomberg claims he needs to lay off 6,166 teachers in order to save $300 million dollars so that he can spend $550 million in the next fiscal year to upgrade technology in schools.

Meanwhile he has spent over $1 billion on technology in the past few years and what do schools have to show for it?

Internet access that doesn't provide any access at all (takes fifteen minutes to check your email sometimes, depending upon time of day.)

But of course the outside consultants hired by Bloomberg to provide all this technology have done very well.

Take the one who was arrested this week for stealing $3.6 million from the city from 2002-2008 on top of the six figure salary the DOE was already paying him.

Willard "Ross" Lanham was really living it up on the mayor's largesse.

He bought three luxuries home and built his own real estate subdivision on Long Island - even took the neighbors on vacation trips.

And his wife - now estranged - well, what can we say about her that the Daily News hasn't:

Self-proclaimed cougar Laura Lanham is ready for a typical Saturday night out - although she makes it clear her provocative outfit isn't hunting gear.

"I don't prowl - they find me," the lithe, hazel-eyed housewife said Saturday. "The young guys love hanging out with me and my friends because we're not demanding."

Lanham, 42, met with the Daily News at Four - a trendy Melville, L.I., spot that bills itself as a "Food Studio/Cocktail Salon" - to describe an ordinary day in her unusual life.

The mother of three said she never set out to be a cougar. She was 23 when she married now-estranged hubby Willard (Ross) Lanham - a Department of Education computer consultant accused of stealing millions in public money - and led a typically sedate suburban existence.

But when she filed for divorce in April 2008, Lanham soon found herself looking at men her son's age in a different light.

"Yes, I'm attracted to them," she said. "But you know, at first I thought it was weird, because I'm a mother. My friends said it's much more common than I thought."

The "yummy mommy," as Lanham was billed in one of her blog postings, acknowledges there's an attraction to the 20-somethings in Long Island dance clubs that was missing with her 57-year-old husband - with whom she still shares a home.

"I'm not going to say there isn't a sexual compatibility there, because there certainly is," she said. "Let's put it this way: I get along with these kids."

In a strange twist of fate, Lanham's 15 minutes of recent fame is all because of her estranged spouse.

His arrest for allegedly swiping $3.6 million in city school funds propelled her into media attention. The one-time aspiring Playboy centerfold has handled it well, and even expressed her desire for a reality show.

Her friends say she should aim higher.

"They said, 'Look at Demi Moore. You could be the Demi Moore of Long Island!'" Lanham said.

Now this woman I like - living it up on the city's largesse, unapologetic about it all and just looking for the next cocktail and next co--, er, young buck to make those nights go by faster.

Hell, judging by the articles about her, I'm surprised that Bloomberg hasn't offered her a job as schools chancellor to replace the now defunct "cougar" Cathie Black.

I think because Laura Lanham doesn't go to the same UES parties as Bloomberg, she hasn't been offered the position yet.

But now that she's getting some press and getting the mayor's attention, maybe now he'll put her in her rightful place in the Bloomberg worldview - a position of power and prestige.

After all, Laura Lanham has lived off the largesse of others, has stolen everything she has, is a bloodsucker extraordinaire and seems clueless about every important aspect of life - just like Cathie Black.

Why not have one predatory cougar replace the last one?
Posted by reality-based educator at 3:24 PM