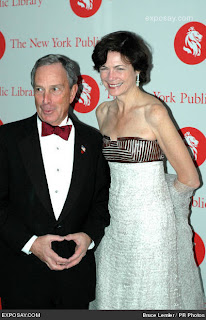 The Teamsters are engaged in a labor dispute with Sotheby's.

Diana Taylor, the mayor's beard, er, girlfriend, sits on the board of Sotheby's.

Some members of Teamsters Local 814 and some members of Occupy Wall Street showed up at a board meeting of the Hudson River Park Trust, which Ms. Taylor chairs, to confront her over the Sotheby's/Teamster dispute.

The New York Observer reports the mayor's girlfriend threatened to resign from the Sotheby's board if Sotheby's CEO Bill Ruprecht “accedes to any of your demands.”

DNAinfo described the confrontation this way:

Two of the 43 workers approached Taylor, an investment executive and former New York State Superintendent of Banks, at a public meeting Thursday demanding she be held accountable for their lockout and lack of a contract they deem fair.

"Are you going to ignore what's happening to our families in your name?" one worker asked Taylor at the meeting for the Hudson River Park Trust Board, which she chairs, held at the City Planning Commission's office on Reade Street.

Taylor fired back: "I have one thing to say to you. I've had one conversation with [Sotheby's President] Bill Ruprecht about this, and I told him that if he accedes to any of your demands, I will resign from the board. That's all I have to say."

"That's fine with me," said Taylor, who also sits on the board of Brookfield Properties, the owner of Zuccotti Park, which Occupy Wall Street called home for months.

"So you don't support working families in New York who have worked hard to make Sotheby's profitable," the man asked as Taylor ignored him and moved the park meeting agenda forward.

After the meeting, the teamsters called on Taylor to resign as chair of the Hudson River Park Trust unless she apologized. If she refused, the union said they wanted Gov. Andrew Cuomo to replace her.

"We are shocked at Taylor's blatant disregard for working New Yorkers and their families," Teamsters Local 814 President Jason Ide, of the art handlers union, said in a statement. "Living with Mike Bloomberg has clearly turned Taylor into an elitist with callous disregard for working families. It's time someone gave her a wake-up call."

What exactly does it mean to get a "wake-up call" from the Teamsters?

I dunno, but I don't think I'd want to get one of those from them.

Luckily Ms. Taylor has got Mike Bloomberg and his army to protect her, so everything should work out fine.

Who knows, maybe the Teamsters will get a midnight visit from Ray Kelly and merry men, just the way Occupy Wall Street did.

It seems that Diana Taylor had not a little to do with that too.
Posted by reality-based educator at 10:07 PM