How ugly will the Cuomo scandal get now that the governor has thrown his former aide - whom he once described as like a third son to his father, Mario - under the bus in the Buffalo Billion scandal?

Cuomo's announcement that he's launching his own investigation of his Buffalo Billion Project suggests that there is much more malfeasance to be found by the feds.

Bharara’s deepening probe clearly has the governor rattled, as evidenced by his decision to launch an executive probe into the awarding of Buffalo Billion contracts. Of course, this amounts to the administration investigating itself, which does not exactly inspire confidence, especially given the way Cuomo undermined the Moreland Commission.

The U.S. Attorney launched his probe last fall in the wake of a series of stories produced by Investigative Post that published on our website and broadcast on WGRZ.

In December 2014, I reported on the curious circumstances of the state’s awarding of a contract to LPCiminelli to develop the SolarCity plant in Buffalo and the Cuomo administration’s outrageous efforts to thwart my reporting,

Other key stories have included the state’s continued lack of transparency on the program and its begrudging release of records in the face of a lawsuit we filed with WGRZ. I also did a story in June for a number of papers statewide, including the Rochester Democrat & Chronicle and the Albany Times Union that summed the whole thing up.

In addition to scrutinizing the awarding of contracts, we’ve taken a close look at SolarCity’s shaky finances, including this initial report in October 2014 and a recent update published in February in which I concluded:

With news of the widening federal probe, it’s looking like Cuomo’s political future, as well as taxpayer funds, are at risk.

Tom Precious at the Buffalo News reports that with little seeming action from Bharara in the Buffalo Billion probe, the thinking within the administration was that they had dodged the investigative bullet and could move on:

Though quiet for months, the activity from Bharara’s office firmly puts an end to optimism within the Cuomo administration that the Buffalo Billion probe was running its course. The governor himself, after limiting travel to Western New York for a part of last year, has stepped up his trips to the region.


Indeed, I have the feeling that the leak of the Board of Elections "memo" written by Cuomo appointee Risa Sugarman detailing alleged felonious activity by Bill de Blasio and his campaign team in 2014 was part of Cuomo's feeling better about his own problems with the Buffalo Billion case.

Somebody leaked that story to the press last week (to Ken Lovett at the Daily News, who was also the person to receive the leak about Cuomo's cronies on the hook in the Buffalo Billion probe) and it didn't quite make sense that it would have been the legal entities - Manhattan D.A. Cyrus Vance and U.S. Attorney Preet Bharara - who were involved that.

I thought the leak had come from somebody close to Cuomo to further hammer his "friend" Bill de Blasio as reports surfaced that two de Blasio fundraisers were under investigation for corruption involving the NYPD.

Cuomo may have gotten more than he bargained for, however, since the Buffalo Billion probe was not at an end, just merely about to enter a new phase.

And what a phase it is:

Federal prosecutors in Manhattan and the Federal Bureau of Investigation are looking into whether the former senior aide, Joseph Percoco, and his wife failed to properly disclose thousands of dollars in income they had received from a company or companies doing business with the state, two of the people briefed on the matter said.

The other people whose conduct is under examination in the investigation, two of the people said, include Alain E. Kaloyeros, the president of the State University of New York Polytechnic Institute, who was a central player in the Buffalo Billion; Todd Howe, a lobbyist and longtime associate of the governor and his father; Louis P. Ciminelli, a developer in Buffalo; and a company called Competitive Power Ventures.


The administration wants the word out there that the governor himself is not under investigation and that nobody currently working on the second floor got a subpoena:

A source with knowledge of the investigation said Cuomo’s office received the Bharara subpoena on Friday. The source would not discuss what documents or information were being requested by Bharara, the same federal prosecutor who in December won the corruption convictions of former Assembly Speaker Sheldon Silver and former Senate Majority Leader Dean Skelos. Bharara also recently opened a probe into fundraising activities by the campaign of New York Mayor Bill de Blasio, one of Cuomo’s chief protagonists.

The source said the new subpoena was not directed at any individuals in the Cuomo administration, including the governor, but was sent to the executive chamber.


But the executive chamber subpoena was not the only one to go out:

Another source said subpoenas have been issued to at least two other entities during the past week; the source would not identify the recipients.


Here is who didn't get a subpoena:

LPCiminelli, through David C. Oliverio, the company’s attorney, said the firm has received no additional subpoenas since Bharara’s investigation first began nearly a year ago.


So, where does this go from here?

One thing we won't get is additional pronouncements from the governor about how swell his Buffalo Billion program is, like we got just a couple of weeks ago on April 6, when he called it the "Dawning of a new day" for the City of Buffalo.

After that, it's hard to say where this goes.

I will look forward to Jim Heaney's thoughts on the matter, as I'm sure many other readers out there will too.

But I would say this - it certainly could reach as high as the governor.

If anybody knows where the bodies are buried in Andrew Cuomo's closets, it's "his closest and most loyal" former aide, Joe Percoco.

With Cuomo throwing Percoco under the bus yesterday in both an official statement from the administration and comments from another former aide, Steven Cohen, to the NY Daily News, Percoco certainly will have some motivation to share stories with prosecutors.

Dunno about you, but if I had been Governor Cuomo's Luca Brasi for the last few decades and I heard the following, I might get an inkling to tell some stories about buried bodies and midnight whackings:

Steven Cohen, Cuomo's former chief of staff in both the attorney general's office and the governor's office, said Cuomo won't put his friendship above "integrity and the obligation owed to the public."

"Friend or not, any instance of misconduct will be met with unambiguous action to ferret out the wrongdoing, correct the problem and ensure that law enforcement exacts the appropriate penalty," Cohen said.

One thing we can be fairly certain of - the NY Post will not go hard and heavy on this Cuomo scandal the way they have with the de Blasio scandal.

Indeed, they don't even mention the Cuomo scandal today on the front cover today and barely cover it in the paper at all: 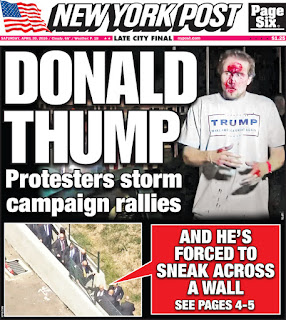 Let's imagine what the cover would look like had de Blasio cronies gotten caught up in a scandal like the Buffalo Billion probe? 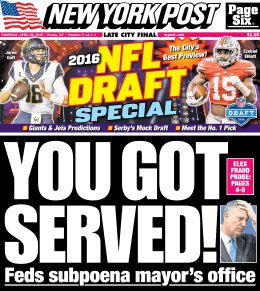 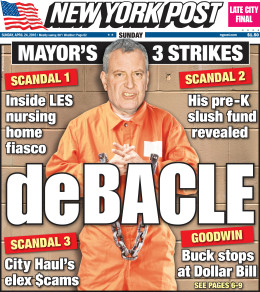 Just want to note the Postie hypocrisy before closing the piece.

That's one thing you can always count on in this life - the Posties will go hard and heavy against political enemies while ignoring similar stories against friends, allies and associates.

In any case, depending upon what happens in the now widening Buffalo Billion probe, the NY Post may be forced to acknowledge the scandal on the front page and how it puts their criminal pal Andrew in the same scandalous boat as their favorite pinata, Bill de Blasio.

More as we get it - Perdido Street School blog will be back up and running for the Cuomo corruption story.

Posted by reality-based educator at 10:20 AM