The NY Times sets the stage:


Ending months of anticipation and speculation, Mayor Bill de Blasio will meet on Friday with federal prosecutors and F.B.I. agents who have been investigating the mayor’s campaign fund-raising for nearly a year, according to people with knowledge of the matter.

A grand jury has heard evidence in the case, some of the people have said, but it remains unclear whether the investigation, focused on whether the mayor or others in his administration traded beneficial city action for donations to his 2013 election campaign or to his now-defunct nonprofit political group — or both — will result in charges. Either way, the interview is an indication that the expansive criminal inquiry is most likely in its final stages.


The mayor is expected to be questioned on Friday morning in a conference room at Kramer Levin’s offices in Midtown Manhattan, according to the people with knowledge of the planned session, which they said is expected to last about four hours. The prosecutors and agents want to question the mayor about more than a dozen topics.

In addition to investigating whether the city took any action on behalf of Mr. Indig as a result of his support for the mayor, the prosecutors and agents are also likely to focus on a number of other donors who have come under scrutiny, including two who have been of intense interest to prosecutors. They are Harendra Singh and Gina Argento.


Louis Flores on what may be going on here:

Proffer or "queen for a day" letters are written agreements between federal prosecutors and individuals under criminal investigation.... pic.twitter.com/VWsXYzndHn
— Louis Flores (@maslowsneeds) February 24, 2017


You can bet Hakeem Jeffries, Scott Stringer, Ruben Diaz Jr and other potential challengers are watching what happens today and ensuing days closely.

So far, no serious challenger to the embattled de Blasio has emerged but clearly an indictment of de Blasio on corruption charges will set off a free-for-all in the Dem primary.

It's difficult to say what indictments of current and/or former aides do to de Blasio's 2017 re-election chances - it all depends on how much residual damage is done to de Blasio if/when that happens.

De Blasio has led a bit of a charmed life these past few months, having much of the news around the corruption investigations buried under an avalanche of Trump news while de Blasio attempted to become the local face of opposition to Trump's policies on immigration, health care, etc.

For the last few years Cuomo has spent much of his free time looking for ways to torture de Blasio, including looking for potential challengers to the mayor for 2017, but with the Trump administration ensconced in Washington, Cuomo appears to have lost his relish for de Blasio combat and begun setting his sights on a 2020 run instead.

As a result, de Blasio appears to have a pretty easy time of it in his re-election bid - barring criminal charges and/or residual damage some to him by criminal charges on people around him that is.

But that could all change today.

As the Times reported, the questioning of de Blasio today means the investigation is about to come to a close.

Posted by reality-based educator at 8:50 AM 86 comments:

Rep. Hakeem Jeffries, a Brooklyn Democrat, said Tuesday he will not run for mayor of New York City — leaving one less potential challenger for Mayor Bill de Blasio as he faces re-election later this year.

"The stakes are so high in Washington D.C. right now, and I want to be part of the effort to turn the situation around," Jeffries said in an interview. "It would be a dereliction of duty to abandon ship at the moment when times are tough."

Jeffries said de Blasio has benefited from the election of President Donald Trump, and the palpable anger and fear in New York City toward the president. More than 80 percent of the city's voters voted against Trump, and de Blasio has positioned himself in the city as standing up to Trump on immigration and other issues.

"The phenomenon has benefited the mayor because it's taken a lot of attention off of City Hall," Jeffries said.

Jeffries said "top-tier candidates" are still looking to the investigations to see if they "potentially change the dynamic."

"It's not clear to me that there's a meaningful candidate prepared to step forward at the moment," he said.


And so, we appear to have two potential challengers to de Blasio taken out of the equation in one day.

It's been rumored for a while now that Jeffries, who has been elevated into the Democratic leadership in the House, was going to decline to run for mayor, so that announcement wasn't much of a surprise.

But the Massey presser, well, that was a bit of a surprise to me.

Given that we're now in the Trump Era, it was going to be a heavy lift for Massey, a Republican real estate developer, to win post November 2016, but to be honest, I always assumed he was a bit more serious as a candidate than what showed up today.  How could he not have an answer for the stop-and-frisk issue?

You can see the whole Massey presser here at his Facebook page - assuming they don't take it down to try and undo some of the damage.

Go on and watch it and you tell me if he's somebody who can win a mayor's race in NYC during the Trump Era - from what I see so far, it's unlikely.

As for other potential opponents, Scott Stringer has apparently all but ruled out a run (barring something extraordinary coming from the Southern District of New York on de Blasio) and the air around Ruben Diaz Jr. has grown awfully quiet on that front as well.

That leaves this guy who raised $750 last quarter and left the mainstream Democratic conference in the state Senate to join the breakaway, Republican-allied Independent Democratic Conference, a group of faux Dems growing increasingly unpopular in the Trump Era: 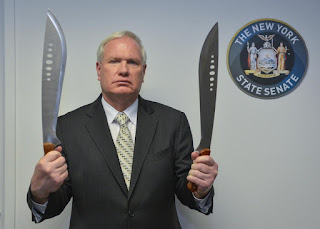 And maybe this guy:

Councilman Dan Garodnick, a Manhattan Democrat who lost his bid to become the City Council Speaker in 2014, has talked with donors, consultants and others about running for mayor. Garodnick has told these people he would want a one-on-one race with de Blasio and would be interested if he saw a path, but isn't sure if there is one.

Asked about the conversations, Garodnick declined to comment. "I am exploring my options as I am term-limited," he said. Garodnick had previously denied he was considering a mayoral run.


Oh, and an ex-Jet with about as much chance of winning City Hall as the Jets had of winning the Super Bowl last year.

And there was that rumor about Hillary Clinton maybe running for mayor, but that's pretty much bullshit.

None of this is going to matter in a race against de Blasio where he has managed to make labor peace with the cops, other unions (including the UFT) have endorsed him, and he continues to enjoy popular support in the black community.

So from what I can see, the biggest opponent de Blasio appears to have for re-election right now is U.S. Attorney Preet Bharara.

No wonder the UFT jumped aboard the de Blasio Express when they did.

Barring something coming from Bharara, it looks like de Blasio is going to waltz to November relatively unscathed.