That's UC Davis Chancellor Linda Katehi doing the walk of shame past UC Davis students after hiding in her office for three hours after giving a press conference at which she defended her use of armed police to disperse Occupy UC Davis protesters from a tent city they had set up next to an academic building to protest tuition hikes and police brutality at UC Berkeley.

Police, dressed in stormtrooper gear straight out of Star Wars and brandishing machine guns like U.S. soldiers in Baghdad, first destroyed the tent city students had erected, then ordered students to leave the area or face arrest.

Here is what happened next:

The police atrocities did not end there, as Assistant Professor of English Nathan Brown described in his letter to the chancellor calling for her to resign:

Police used batons to try to push the students apart. Those they could separate, they arrested, kneeling on their bodies and pushing their heads into the ground. Those they could not separate, they pepper-sprayed directly in the face, holding these students as they did so. When students covered their eyes with their clothing, police forced open their mouths and pepper-sprayed down their throats. Several of these students were hospitalized. Others are seriously injured. One of them, forty-five minutes after being pepper-sprayed down his throat, was still coughing up blood.

Katehi defended her use of armed police on the campus at a press conference held in an administrative building on the UC Davis campus. Students were not allowed to attend this press conference and gathered outside the building to protest. The Davis Enterprise picks up the story:

UC Davis Chancellor Linda Katehi remained inside Surge II for nearly three hours Saturday after hundreds of protesters surrounded the building, interrupting her news conference about the pepper-spraying of protesters by campus police the day before.

Protesters showed up minutes after the 4 p.m. conference began. Their voices could be heard within the building.

Many of those who had gathered outside said they believed Katehi did not give the UCD community sufficient notice and that the choice of venue was unfair because it did not permit the general public inside.

“After what happened yesterday, everyone is really, really angry,” said Steve Cox, a UCD graduate student. “It’s kind of unfair for her to hold a press conference in a really small venue with very short notice to try to exclude the student body. We have just as much of a right to be there as anybody and she needs to answer to us.”

The press conference was cut short as a result of the student protest outside, but Katehi refused to leave the building, trying to make it look like students were holding her hostage even though they had cleared a path for her to leave:

The protesters formed lines leading away from the building, leaving a pathway to permit the chancellor’s exit, but the chancellor did not leave immediately following the conference.

“It didn’t seem like we would be allowed to leave,” said Mitchell Benson, assistant vice chancellor for university communications. “There was quite a loud, and I would hazard to say, hostile crowd outside both of the doors of the building and it didn’t seem that she would be able to get out in a safe manner, so she stood put for a couple of hours.”

While protesters chanted outside for, among other things, her resignation, Katehi stayed inside.

“I didn’t have a sense that it was an appropriate atmosphere or an appropriate environment to walk out of the building at that time,” Mitchel continued. “There was no rush to leave.”

Here is a photo of students clearing a path for Katehi and other administrators to leave: 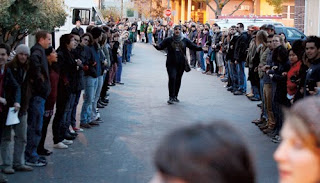 Doesn't look like Katehi is being held hostage by students.

Rather, it looks like she feared to face them on her way out.

And no wonder - when she not only ordered armed police to disperse protesters but even defended their use of force against students in order to keep the campus safe before video surfaced showing very clearly that the students were not aggressive in any way and force didn't need to be used, well, why would she want to walk by them?

She has to know, despite her public refusal to step down or acknowledge that she did anything wrong, that her days are numbered at UC Davis and she has now become one of the faces of brutal repression in modern America.

This atrocity at UC Davis will go down in American history as one of the more egregious examples of Police State Clampdown.

These are not violent, aggressive criminals that police can only corral by using extreme force.

These are seated students engaged in passive civil disobedience, the kind that Gandhi and Martin Luther King engaged in.

It is very difficult if not impossible for ANYBODY to defend this brutal act or the lack of accountability that Katehi is showing by not immediately resigning in disgrace.

This woman should not only lose her job at UC Davis, she should never be allowed to work in any position connected to young people, or even adults, ever again.

Clearly she has neither the ethics nor the judgment to be in any position of authority.

As for the police, one of the officers who sprayed students has been identified as Lt. John Pike.

There is another officer doing some spraying here, although I have yet to see this one identified.

Others are reported to have held students down while officers pepper sprayed their mouths.

In a day and age when teachers are subject to having their names and teacher data reports published in the newspapers as a way to hold them accountable for performance, I cannot see how the police officers who engage in these brutally repressive acts can remain nameless and faceless behind their THE EMPIRE STRIKES BACK helmets and pepper spray fire extinguishers.

And yet, other than the this instance with Lt. Pike and a few other instances, so far they have.

Even in cases where they have been identified, as in the case of Tony Bolonga in NYC, there has been little to no punishment of the police brutality.

Bologna, for instance, lost 10 vacation days and was transferred from Manhattan to Staten Island, where he lives.

Gee, how awful - now he has a shorter commute to work.

But these acts of police violence and state oppression are really adding up, as Garance Franke-Ruta details here in The Atlantic.

This is the official response to the OWS protests.

It won't be long now before there is a Kent State-like atrocity wherein some sadistic police goon opens fire on protesters.

That is unfortunate, but you can see that it is coming.

The police brutality is getting worse with each of these incidents, not better.

They are not being held accountable AT ALL for any of this.

And as Glenn Greenwald has pointed out more than once, they are outfitted with paramilitary equipment, ostensibly to fight terrorism, that they're now itching to use against OWS protesters.

The shame of UC Davis.

The shame of a nation.