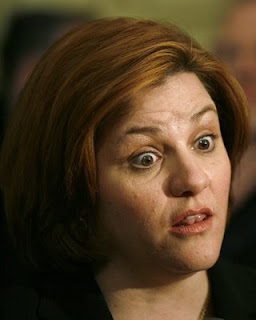 Charter school operators and some of their hedge fund and technology backers met with Christine Quinn this week and offered her a bag full of $15,000 in cash as a little taste of what's to come if she gives them what they want on the charter school issue.

The NY Times reports that charter operators and their backers are worried about what's going to happen to their movement after Mayor Moneybags leaves office.

They are most concerned that Bloomberg's policy of co-locating charter schools in public school buildings will end after Bloomberg goes.

If charter schools were forced to pay for space as opposed to receiving it for free, charter operators fear they would have less money to operate their schools, spend money on public relations and purchase legislators in Albany.

As they look at the current crop of potential mayoral candidates with name recognition - Quinn, De Blasio, Stringer - they worry that they will not have the kind of education reform advocate they have had in Bloomberg (and Cuomo up in Albany for that matter, though that's not mentioned in the article.)

Luckily for them, they're heavily funded by a bunch of hedge fund criminals and Wall Street crooks, so they've got endless amounts of cash to buy off pols at will.

Witness how they bought off Andrew Cuomo with DFER money and Cuomo issued a very charter-friendly, pro-reform education agenda that read like DFER pamphlet within the week.

And all it took was one suitcase full of cash and the promise of more where that came from.

So getting Quinn on board with their agenda should be no problem.

Sure she has some loose (very loose, IMO) ties to the UFT, but the DFER's and the charter operators have the cash and in the political world, that's all that matters.

If they can't get some charter-friendly candidate to jump into the race, they'll buy off whoever does become the mayor and get what they want anyway.

And Christine Quinn has already shown herself willing to shed any and all ideological positions for power and campaign cash.

Frankly, she should come much cheaper than Cuomo came.

They're both political whores, but Quinn is a cut-rate one.

One last point on this: With all the stolen Wall Street and hedge fund-cash the charter operators and their backers have, I don't see why they don't just pay for their own damned school buildings themselves.

But then again, that would leave less money to pay charter CEO's and spend on political bribes, powerful lobbyists, and public relations, so it makes complete sense they continue to want the free real estate ride from the city.
Posted by reality-based educator at 11:03 AM