Governor 1% has a new website up called NYStudentsFirst that tracks the districts in NY State that have come to an agreement with their local unions over a teacher evaluation system.

As Assailed Teacher points out, the site is ridiculously simplistic, offers few details about the evaluation systems agreed upon by the local districts and unions and is simply another hammer Cuomo is trying to use to force the unions to agree to an evaluation system based upon test scores.

Cuomo’s site steals its name from both Tweed (“Children First”) and Rhee (“StudentsFirst.”) Which it should, since the ideology behind Cuomo’s policies is the same ideology behind the policies promoted by Rhee and pushed by Bloomberg and Tweed.

I would like to add that the name of the site ought to be Pearson First!!! since that company will be the main beneficiary of all of these new evaluation systems that are going to force new standardized tests (both state and local tests) into every grade in every subject, K-12.

And we shouldn't be surprised about that.

As Michael Winerip has reported in the NY Times, Pearson has been bribing state officials, including former NYSED Commissioner David Steiner, with overseas education junkets and other goodies to sign testing contracts with the company.

And as Alan Singer pointed point at Huffington Post last week, Pearson literally is trying to control what gets taught in every school in the nation, how it gets taught, who does the teaching of that material and how both the teacher and the subject matter is assessed:

If it has its way, Pearson will soon be determining what gets taught in schools across the United States with little or no parental or educational oversight. Pearson standardized exams will assess how well teachers implement Pearson instruction modules and Pearson's common core standards, but not what students really learn or whether students are actually learning things that are important to know. Pearson is already creating teacher certification exams for eighteen states including New York, organizing staff development workshops to promote Pearson products, and providing school district Pearson assessment tools. In New York, Pearson Education currently has a five-year, $32 million contract to administer state test and provides other "testing services" to the State Education Department. It also recently received a share of a federal Race to the Top grant to create what the company calls the "next-generation" of online assessments.

From February 9-11, Pearson organized a National Summit in Orlando, Florida to promote its concept of "Best Practices in School Improvement" and to sell its programs for integrating Common Core State Standards into curriculum, instruction and assessment. These include providing "struggling and successful schools alike with professional development and consultative services that have helped their leaders transform instruction in the classroom and raise students' achievement levels." The company brags that senior America's Choice fellows Sally Hampton and Phil Daro, employees of a Pearson sub-division, "not only led the development of the Common Core Standards, but also helped design Pearson's CCSS services, helping us tailor our professional development, district level consultative services, job-embedded coaching, learning teams for building capacity, and even whole school CCSS implementation services in order to meet your specific needs and interests as you align curriculum content and practices to the standards."

Singer goes on to note that Cuomo has appointed David Wakelyn, a former employee of the Pearson sub-division America's Choice, to be Deputy Secretary of Education in New York State.

Hey, who cares that the state attorney general is looking into allegations that Pearson "has acted improperly to influence state education officials by paying for overseas trips and other perks" - let's put a guy with ties to Pearson in charge of overseeing state education policy.

It seems Pearson makes all the calls on education policy in this state - from teacher evaluation deals to testing contracts - and Governor Cuomo is happy to sign off on that.

In fact, education officials in many states and at the USDOE are signing off on Pearson running education policy.

No wonder they're the leading "education company" in the world: 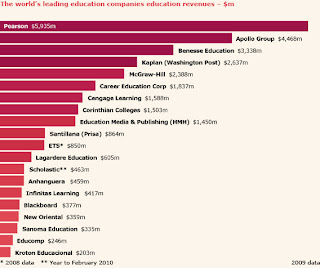 And with 45 states signed off on the Obama-approved Common Core Curriculum and Pearson ready to roll out curriculum materials, tests and teacher evaluation programs for the Common Core, it's only going to get better for Pearson from here on out.

Pearson First!!! indeed.
Posted by reality-based educator at 10:53 AM