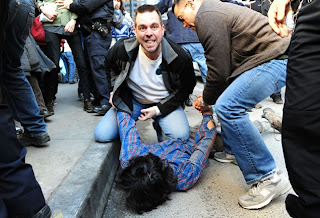 Occupy Wall Street protesters’ numbers swelled Saturday night as they prepared to spend the night in the lower Manhattan park where their movement began, but cops forced them out before Zuccotti was reoccupied.

Demonstrators regrouped in Zuccotti Park just hours after a half-dozen of their number were arrested as they marked the movement’s six-month anniversary, police and demonstrators said.

Michael Moore, the documentary filmmaker, made an appearance at the park, wandering among protesters after giving a speech at a Socialist forum nearby.

“We are unstoppable; another world is possible,” chanted some of the hundreds of demonstrators crammed into Zuccotti Park in the afternoon.

I was at the Left Forum yesterday - a lot of good energy and good people there.

More on that soon.

As for the Zuccotti news, I am glad to see that as the global-warming induced weather is heating up, so is the Occupy movement.
Posted by reality-based educator at 9:49 AM

Email ThisBlogThis!Share to TwitterShare to FacebookShare to Pinterest
Labels: Occupy