Somehow they must have missed one of the more high profile sites at the 90 story condo with the apartments so expensive that the cheapest one goes for $7.35 million. 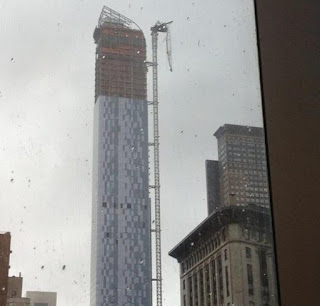 Police are evacuating the area surrounding a super luxury high-rise under construction near Carnegie Hall as a rooftop crane dangles precariously in the wind on the roof.
Police have closed off Seventh Avenue between 58th and 55th Streets. All occupants of buildings on West 57th Street between 6th and 7th Avenues have been advised to move to the lower floors.

The unfinished tower known as One57, at 157 W. 57th St., will be the city’s tallest residential building when completed and available only to the uber-rich.

Public records show the site has been rife with complaints for building violations, including a crane violation from Sept. 21, when someone reported that the rooftop crane was leaking oil on to an adjacent building.


At yesterday's press conference, Bloomberg was asked if the city had made sure that all major construction sites around the city had been secured.

He responded they had.

Somehow they missed this one.

That's a very dangerous situation over on 57th Street, what with the hurricane coming ashore in the next few hours at Atlantic City and wind gusts and sustained winds expected to increase.