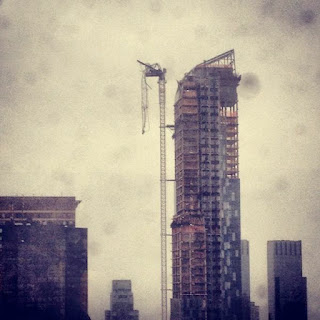 "All weights are on crane's wrong side --- very precarious below, move out!"


Dunno if her credibility is any better than her husband's, but at yesterday's press conference, Bloomberg said the city had made sure all major construction sites were secure.

Except for this one, at the second most prominent construction site in New York City after the WTC.

He had better hope that thing doesn't come down during the storm.

That could be one big wreck.

And that's assuming it doesn't cause any casualties.
Posted by reality-based educator at 4:04 PM