This is a very large storm. 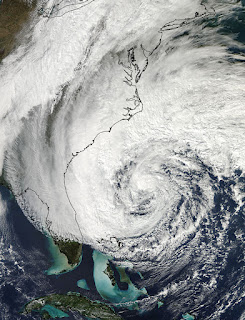 And it's about to take a westward turn.

The Weather Channel's latest tracking, as of 9:51 PM, has it landing somewhere between Maryland and New York City.

Storm surge model from Stevens Inst Technology shows higher surge at The Battery in Manhattan than during Irene. http://hudson.dl.stevens-tech.edu/SSWS/d/index.shtml?station=N017 … #Sandy

Jim Cantore ‏JimCantore I am very concerned about Mayor MikeBloomberg decision on No evacuations. Wondering if a hurricane warning would have changed that. Sandy

Here is what Bloomberg said earlier about this storm that he says is "less dangerous" than Irene:

To reiterate what I said before, Bloomberg better hope the information he's getting is the correct information, because the info that's coming from The Weather Channel, Stevens Institute and elsewhere sure is contradicting what our mayor is saying.

Posted by reality-based educator at 11:03 PM