Cathie Black's Four Tips On How To Be A Leader 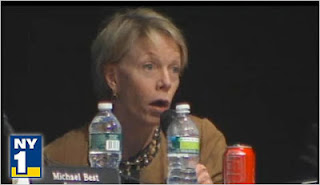 Cathie Black is back in the news, offering advice on how to be a leader to the Daily Muse.

She is described as a "former chairman of Hearst Magazines, best-selling author, advisor, investor and board member in digital start-ups and entrepreneurial companies," but not once is her ill-fated 96 day chancellorship of NYC schools mentioned in the piece.

We here at Perdido Street School, having been keen Black-watchers the past few years since she got run out of the NYCDOE, have our own Cathie Black tips for leadership.

First, know absolutely nothing about the job you're doing, the people who work under you, and the kids you're supposed to be working for.  If possible, have contempt for all of those people and things and show that contempt by mocking people as you close their kids' schools or by suggesting birth control as a solution for all the problems those people bring to you for resolution.  Or even better - reference the Holocaust when talking about making choices about schools.

Second, hide in your office when it becomes clear that the people and your own underlings (including those at Tweed) have as much contempt for you as you have for them.  Go MIA for as long as possible, never give an interview to the press or allow a reporter anywhere near you, as you have no idea what you're talking about and can be assured that if you open your mouth to the press, you will only confirm that fact to others.

Third, drink as much as possible to hide your pain.  Attend as many parties as possible, where social drinking is accepted, but go over the limit as often as you can and sometimes take out a tree on the way home with your car.  Then have your p.r. flak insist you weren't driving drunk and tell the press that the driveaway where the other 20 cars made it out okay was too narrow for you and you just couldn't help but ding a couple of cars and killing a tree on the way out.

Fourth, try and re-emerge into the business world after the disaster that was your 96 day wonder chancellorship by offering an idiotic little piece like "How To Be A Leader" at the Daily Muse even though it's clear you do not know the first thing about good leadership and frankly wouldn't know a good leader if you fell over one on the way home from Happy Hour.  Know that your entire career has been enabled by nepotism and cronyism, that knowing and socializing with the right people means more than anything else in 2013 America.

These are the tips we here at Perdido Street School have picked up from watching Ms. Black work her magic on both the private and the public sectors.

Now you don't have to read her little Daily Muse article or, heaven forbid, buy her books on leadership skills.
Posted by reality-based educator at 4:42 PM