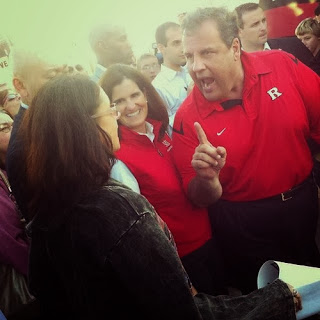 In the beginning, when critics first began to ask questions about why Christie's Port Authority appointees closed lanes to the GWB on the NJ side in September for an alleged traffic study that nobody saw conducted, Christie laughed the questions off, claiming the whole thing was a big hullabaloo over nothing.

But after his second PA appointee was forced to resign over the scandal and more subpoenas went out over the matter, with one of Governor Cuomo's PA appointees stating under oath to the NJ legislature that the Christie administration story about the lane closures was untruthful, Christie spent over an hour on Friday trying to again explain away why this burgeoning scandal is no big deal.

But the Star Ledger reports this morning it may be a very big deal, especially as it relates to Christie's 2016 presidential ambitions and it's something I have noted again and again about Christie too (see here and here for two examples).

This guy's as dirty as they come, from his lobbyist days to his padded US attorney expense accounts (and his leaking damaging information about Bob Menendez in order to save his attorney gig when the Bushies were firing all of their US attorneys) to his business deals to his appointing of friends and cronies to positions of power where they rape and pillage the public coffers to his actions in an SEC investigation that saw his brother avoid indictment when all the brother's co-conspirators could not.

If and when he runs for president in 2016, you can bet this stuff will get more scrutiny than it has so far - and now the GWB traffic lane closure scandal just reinforces the narrative about Christie's vengeful nature and essential dishonesty.

TRENTON — Not too long ago, Chris Christie was joking about it.

But as the controversy over lane closures at the George Washington Bridge continues to swirl, Democrats in Washington are pouncing on the Republican governor in the hope that they can stop his potential quest for the White House before it begins.

For Christie, it’s the first taste of what it’s like to be his party’s front-runner for the next presidential sweepstakes.

"National Democrats will make an issue about everything about me so get used to the new world, everybody," Christie said at a news conference Friday. "We’re not in Kansas anymore, Dorothy."
In Jersey’s form of Oz, the bizarre tale of September traffic jams and a supposedly punished small-town mayor makes the cable news. A group looking out for Hillary Clinton creates a graphic out of Christie’s unsmiling face, a picture of a bridge and a sign that reads: "Lane closed. Expect Christie?"

And the Democratic National Committee issues a campaign-style attack ad asking if the facts add up to "Chris Christie’s political payback?"

"When you run for president, you will be questioned about absolutely everything, and you can’t bluff your way past something like this. It’s not personal life or his weight; it’s related directly to his conduct in office," said Larry Sabato, director of the Center for Politics at the University of Virginia.

"One of the concerns voters will have about Christie is New Jersey’s reputation for rough, take-no-prisoners politics. It isn’t known as the Soprano State for nothing," Sabato said.

At first, the governor laughed off the insinuation he played a role in the traffic mess: "I worked the cones actually. Unbeknownst to everybody, I was actually the guy out there. I was in overalls and a hat, but I was the guy working the cones," Christie said, joking with reporters at a Statehouse news conference.

Last week, Christie was still trying to put the issue to rest. He said the resignations of his two top appointees to the Port Authority, Bill Baroni and David Wildstein, signaled a fresh start. He put former federal prosecutor Deborah Gramiccioni in Baroni’s place, saying: "We’re gonna turn the page now. We’re sending new leadership over there in Deb."

The governor went on to entertain reporters and people watching online — Statehouse news conferences are streamed live — for an hour, taking questions on every facet of the investigation.

"He wants to present himself as an independent and a tough executive," said Julian Zelizer, a professor of history and public affairs at Princeton University. "A lot of Democrats and a lot of Republicans want to present him as a real rough and unfair and somewhat explosive politician. It’ll be a competition between which story wins out."

The Democrats in Washington are using the tale of the bridge to undermine the narrative Team Christie perpetuated in all manner of media: He’s a bipartisan straight talker and principled leader. They’re eager to present the bridge controversy as part of a pattern, noting that Christie has given seemingly conflicting statements about whether he wants to extend in-state tuition to the children of people who came to this country illegally.

"This of course gives any political opposition that he has either now or in the future, fodder, which is exactly what he does not want," said Brigid Harrison, a professor of political science and law at Montclair State University. "He does not want questions raised about his qualifications or experience in office."

Just as Christie is flipping on the look-at-me national media switch, state Democrats appear to have finally found their mojo, landing punches on a governor who bobbed and weaved with ease during his first term.

"This is really in my view the first time that the Democrats have effectively held Christie’s toes to the fire," Harrison said. "In my view, this is a different Democratic Party than we’ve seen for the past four years."

Next up? Documents from seven Port Authority officials are due on the desk of Assembly Transportation Committee Chairman John Wisniewski (D-Middlesex) on Thursday.


This GWB scandal isn't going to go away yet, not with more subpoenas going out to PA officials this week.

In addition, Christie's handling of the scandal has given lots of ammunition to critics and opponents who have pointed out some of his previous malfeasance.

If and when Christie runs in 2016, you can bet the Madoff connection, the for-profit Edison School lobbying, the padding of his US attorney expense accounts, the SEC investigation of his brother, the funkiness around the alleged Menedez indictment that never happened, the political appointees (and friends and/or business associates) who strip the public coffers of tax dollars for their own benefit will all get the scrutiny they deserve.

On top of that, Dems in NJ finally have gotten off the Christie bandwagon (many of them either officially or tacitly supported his re-election in 2013.)

If Dems start acting like an opposition party in Trenton rather than co-conspirators in Christie's government, they might actually uncover even more Christie malfeasance.

It's not like they would have to dig too hard - Christie lies repeatedly to save his ass and even a rudimentary digging into various scandals will unearth that (like his lying about why NJ Transit trains were vulnerable to Sandy back in 2012.)

Mary Pat Christie was yucking it up before the 2013 election as her husband screamed at a teacher who dared to question his education policies.

You can bet she isn't yucking it up this weekend as her husband finally starts to get some of the scrutiny he deserves for his criminality and dishonesty.

UPDATE - Here's a timeline of the scandal, courtesy of the Star Ledger:

Sept. 9: The Port Authority closes two of three local access lanes from Fort Lee to the George Washington Bridge, the nation's busiest crossing, bringing traffic to a halt and turning borough streets into a parking lot.

Sept. 12: Fort Lee Mayor Mark Sokolich writes to Baroni and expresses the belief that the closures were "punitive" and asks they be lifted immediately. Some suspect they were put in place because Sokolich, a Democrat, did not endorse Christie for re-election.

Sept. 16: The Port Authority claims the closures were due to a traffic safety study.

Oct. 2: Assemblyman John Wisniewski (D-Middlesex), chairman of the Assembly Transportation, Public Works and Independent Authorities Committee, says he will convene a hearing to determine who ordered the lane closures and if they were politically motivated.

Oct. 16: The Port Authority announces it will undertake an internal review to determine why the lanes were closed and whether proper procedures were followed.

Nov. 5: Christie is re-elected governor in a landslide victory over Democratic challenger Barbara Buono, a state senator from Middlesex County.

Nov. 13: The Port Authority remains mum on the lane closures despite mounting criticism and a barrage of questions from reporters at its board meeting in Jersey City.

Nov. 20: With the threat of subpoenas, Wisniewski requests that top Port Authority officials including Baroni, Foye and Wildstein testify before the transportation panel about the closures.

Nov. 25: At a hearing held by the Assembly transportation committee, Baroni says the closures were ordered by his direct subordinate, Wildstein, as part of a traffic study and acknowledges making a mistake by not notifying Foye, police or the public.

Dec. 2: Christie brushes aside speculation that the bridge closures were politically motivated, joking at a new conference, “I worked the cones. Unbeknownst to anyone, I was working the cones." The governor said he had nothing to do with situation.

Dec. 6: Wildstein announces his resignation, saying that the controversy over the lane closures has "become a distraction, and I’m going to move on."

Dec. 9: Foye testifies before the transportation committee that he was unaware of any traffic safety study being conducted on the bridge in September, despite the testimony of Baroni two weeks earlier. After the hearing, Wisniewski calls for Baroni's resignation.

Dec. 12: Wisniewski issues seven more subpoenas as his investigation into the closures widens. The requests seek documents and communications from Port Authority officials to determine what they knew about the traffic-snarling lane closures.

Dec. 13: Christie announces the resignation of Baroni and appoints his trusted staffer, Deborah Gramiccioni, to the post. The governor says the change was planned regardless of the controversy, and reiterates he had nothing to do with the lane closures.
Posted by reality-based educator at 9:14 AM