AFT President Randi Weingarten, presumably one of the recipients of the "punch in the face" Candidate Chris Christie wants to give to national teachers unions, released the following statement about Christie:

American Federation of Teachers President Randi Weingarten reacted to Christie after the Republican governor said over the weekend the group deserves a punch in the face. The union leader criticized Christie for promoting a culture of violence.

"Chris Christie has issues—from reneging on his promise to fix pensions to his state's fiscal standing facing near junk bond status. But the biggest issue is he's a bully and has anger management problems," Weingarten said in a statement.

"That he would threaten to punch teachers in the face — mostly women seeking to help children meet their potential and achieve their dreams — promotes a culture of violence and underscores why he lacks the temperament and emotional skills to be president, or serve in any leadership capacity," she said. "It's a sad day in the life of our nation to see a candidate threaten violence to gain political favor."


Weingarten doesn't use the word "misogynist" in her statement, but clearly that sentiment is there:  "That he would threaten to punch teachers in the face — mostly women seeking to help children meet their potential and achieve their dreams — promotes a culture of violence."

And indeed, he does seem to take a certain glee in blowing up on women, as this infamous incident from 2013 with the attendant photo shows: 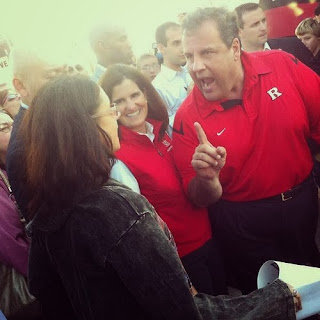 Yesterday, the NJEA called for Christie to resign as governor.

57% of New Jersey residents were in agreement with that sentiment as measured by a July Monmouth poll.

Personally I think the more Christie tries to relieve the Glory Days of his early governorship where he beat up on teachers and union members weekly in his infamous town hall videos, the better.

This stuff isn't helping him in the 2016 GOP Presidential Primary, not with Donald Trump have superseded Christie's old act with a much more outrageous (and new) act of his own.

The teacher-bashing just speaks to where Christie stands these days politically post-BridgeGate - trying to live in the old "Glory Days" while the rest of the political world has moved past him.

His teacher-bashing misogyny act doesn't play well anymore - not in New Jersey with voters (where he got booed by 61,000 yesterday - twice) and not in the GOP primary where he lags at the bottom of the race as a political has-been.

But what else can a governor from a state with an economy in the toilet, an infrastructure in tatters, and an electorate furious at him do but try and relive the old days?
Posted by reality-based educator at 3:15 PM