About That Buffalo Chronicle Story Reporting A Cuomo Indictment In January (UPDATED - 12/6 - 12:10 PM)

I see much talk on the Internet about this Buffalo Chronicle piece that reports US Attorney Preet Bharara "intends to indict Governor Andrew Cuomo on January 2nd — along with a half dozen associates and former staffers — on public corruption, racketeering, conspiracy, and honest services fraud."

Before you break out the champagne and start buying those 1 cent copies of Cuomo's memoir All Things Possible at Amazon, let me offer a word of caution about anything coming from the Buffalo Chronicle.

Matthew Ricchiazzi, who runs the political blog The Buffalo Chronicle, is a 29 year old politician wanna-be who tried to run for mayor of Buffalo in 2009 before the Board of Elections rejected his petition to get on the ballot.

As a journalist, his track record is as problematic as his political career - Ricchiazzi been accused of misquoting people and "reckless reporting" in the past.

In this piece, his sourcing is thinner than Donald Trump's skin ("sources say" and some unnamed "longtime Albany insider"), which doesn't exactly inspire me with confidence in the reporting.

Our friend in Buffalo, Sean Crowley, had this to say about Ricchiazzi and the Buffalo Chronicle back in July when Ricchiazzi first posted that a Cuomo indictment was coming:


As soon as you see Ricchiazzi's name anywhere on or near the article you can safely bet it's inaccurate at best. I was told last week that Buffalo Chronicle is owned and/or funded by Carl Paldadino which I am not even sure to be fact but it would add to the lack of credibility anything this guy says.


Ricchiazzi posted something similar in October about Cuomo indictment, which I posted about here.

I think there are plenty of reasons to keep a close watch on where Preet Bharara goes next now that he's got Shelly Silver convicted on all seven corruption counts and Dean Skelos' conviction is all but a done deal, given the wiretaps and evidence.

I wrote about that this morning, so I won't rehash it except to say that the Buffalo Billion investigation is the thing to keep an eye on.

There certainly is a lot of smoke around Cuomo's Buffalo Billion Project, his campaign donors (one of whom was at the center of both the Silver and Skelos corruption cases) and the Moreland Commission shutdown itself.

While I think it's fun to try and read the smoke rings from all that smoke surrounding the Buffalo Billion Project and Cuomo's donors, I wouldn't trust anything coming from the Buffalo Chronicle or Matthew Ricchiazzi and I wouldn't bet the mortgage on Preet Bharara indicting Andrew Cuomo and six associates on public corruption, racketeering, conspiracy, and honest services fraud on January 2.

UPDATED - 12/6 - 12:10 PM: Sean Crowley posted the following at his blog regarding the comment he made on a previous Perdido Street School blog post that I embedded in the above post:

Since Carl Paladino became a Board of Ed member in Buffalo I've mentioned him on this blog probably dozens of times. Funny though nothing I've ever said about his antics as a board member has ever caused him to even acknowledge I exist. And I've said quite a bit  -- very little of it flattering to a guy who is used to flattery from his legions of fawning admirers. But in debunking a Buffalo Chronicle post a few weeks back in a comment on Perdido St. I mentioned that someone had told me Paladino pays Buffalo Chronicle's expenses. I also mentioned that I wasn't even sure it was true but it had me thinking so I repeated it in the comment. Mea culpa.  And when BC came out with its latest whopper about Cuomo being indicted bY Preet Baharra on Saturday January 2, the author of Perdido St. reposted my last remark about the low credibility of Buffalo Chronicle to cool the fever of anyone popping champagne and street dancing over the "news."


Next thing you know, this showed up: 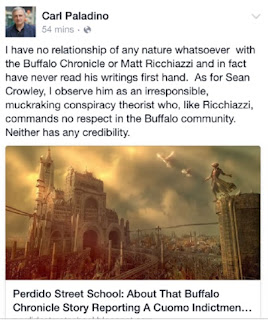 As Sean noted in his piece, it's interesting that after all the stuff written about Carl Paladino on the education blogs, it's the linking of Paladino to Ricchiazzi that's the thing that gets a response out of him.

I was attempting to tamp down the excitement that was going around the Internet and social media about the Chronicle's "report" of an impending Cuomo indictment on January 2 and threw Sean's tweet in as further evidence that the Chronicle isn't exactly the best source for news.

In doing so, I did something quite similar to the Buffalo Chronicle writer of the Cuomo indictment piece and became a source of hearsay.

I hereby update the post to set the record straight and note that Carl Paladino says he has nothing to do with Matthew Ricchiazzi or the Buffalo Chronicle.

I still maintain the Chronicle is not exactly the best source for news.

Turns out, on the "Chronicle" story, neither was Perdido Street School blog.