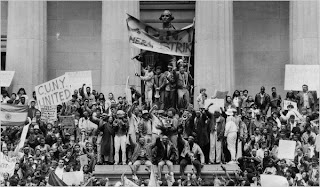 The Times looks at the difference between protests of today and protests back in the day:

Faced with a 5 percent tuition rise and the likelihood of future increases, students at the City University of New York did not take over a building. They did not try to roll over a black SUV with Mayor Michael R. Bloomberg inside. Instead, a half-dozen of them trooped down to State Supreme Court in Manhattan on Friday and filed a lawsuit.

Still, even the most eloquent legal brief lacks the visceral power of May 1969, when 200 Brooklyn College students broke into the president’s office. Fired up by the civil rights movement and demands for open admission at CUNY, the students protested by throwing a lampshade from the second-floor balcony, setting mail on fire, smashing an end table and ripping out phone wires. They escaped before the police arrived.

CUNY colleges once were known as theaters of unrest. In 1970, students shut off elevator service at Hunter College and liberated the cafeteria by serving free food. Helmeted police officers were called, and classes were suspended. In 1976, as CUNY finally faced an end to free tuition, students marched in the streets of Harlem and boycotted classes for three days, while 13 members of the English faculty started a hunger strike.

In 1989, the possibility of tuition increases led students at City College to pour glue and stick toothpicks into the locks of 400 classrooms. Students seized administration buildings and blocked traffic across the city. In 1991, another series of protests prompted classes to be canceled and commencement to be delayed.

More recently, students have organized marches and rallies and shouted at meetings, but have mostly stayed within the confines of law and order.

Frances Fox Piven, a professor of political science and sociology at the CUNY Graduate Center, said it could be that students of today were just discovering their inner militancy. “I think they are more militant than in ’75-’76,” the years of fiscal crisis when CUNY finally went from being a free university to charging tuition, Dr. Piven said.

But compared with 1969, “I think not yet, not yet,” she said. “But movements have a very distinctive dynamic. They can escalate very quickly. It’s not as if all the ideas that are associated with protesters are in place when the protest starts. It’s the protest itself that changes people’s ideas, that engages them and that in a sense educates them.”

I graduated high school in 1985. People don't really think of the 80's as a time of real social activism, but we had some real rip-roaring protests back in the day.

There were anti-Apartheid protests, anti-Contra protests, a work stoppage by humanities graduate students over stipend payments, protests when the chancellor denied Professor Ernest Dube tenure, the creation of a tent city to protest the administration's treatment of graduate students, a firebombing of that tent city (allegedly at the behest of Stony Brook President John Marburger, though that has never been confirmed), the creation of Tent City II, and protests over safety issues for female students.

And those are the ones I remember - I must admit, some of those years are a bit hazy, if you know what I mean...

Now the sixties it wasn't, but it sure felt more radicalized than the current day and age when the banksters and hedge fund criminals are literally stealing the world and the corporate politicians in both parties are helping them.

There is SO much to be outraged at these days - from the bank bailouts to the austerity measures aimed ONLY at working and middle class people to the free trade movement that sells out working people for corporate profit to tax cuts for rich people to the demonizing of teachers and the privatization of public education to the Forever Wars in Afghanistan and Iraq to mortgage fraud/fraudclosure from the banks.

So much to be angry at, yet so quiet they are on the campuses and in the streets.

Until the hedge fund criminals and politicians and banksters feel FEAR over what they're doing, they're going to keep doing it - raising tuition, raising fees, privatizing everything, cutting taxes on millionaires and billionaires, allowing hedge fund criminals to pay 15% in tax, cutting corporate taxes and benefits for gov't workers.
Posted by reality-based educator at 5:37 AM