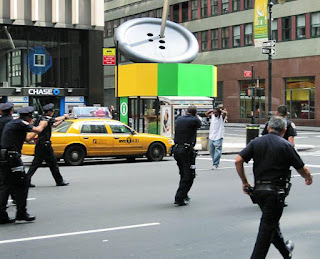 Another day in New York, another dramatic NYPD shooting.

Cops shot a knife-wielding man in Times Square yesterday in the middle of the afternoon. Police claim he had been stopped for smoking marijuana on the street when he pulled out a knife and began running away from them while swinging the knife.

They followed him through Times Square, eventually shooting and killing him on 38th Street and 7th Avenue. The Daily News reports at least fifteen bullet casings on the street, though there may have been more shots fired by the NYPD than that. 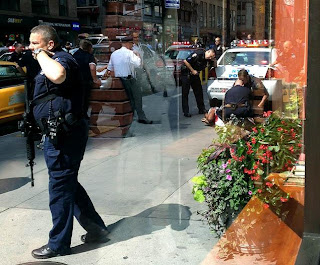 Was this guy a danger and a menace?

According to the media accounts, they'd sprayed him with six blasts of mace and he still hadn't dropped the knife.

The cops claim he lunged at them with the knife right before he was shot.

The NY Post reports he was shouting "Shoot me! Shoot me!" before he "lunged" at them with the knife.

Some people say the knife-wielding man was trying to commit "suicide by cop".

Dunno how much of that to believe and the videos that have surfaced are quite jumpy - it's hard to see what's going on.

That said, the first photo with the man backing away from cops, hands behind his head, as they advance in preparation to shoot him, sure makes you wonder if there was another way to get him down without killing him in a flood of bullets.

But in Bloomberg's New York, this is actually the perfect emblem.

Get rid of the Big Apple symbol and put the photo of the guy with the knife backing away from a dozen armed cops getting ready to execute him in its place.

You don't have to be wielding a knife to get shot by gun-toting NYPD goons.

You can just be trying to flush marijuana down the toilet when they kill you - like in February when police followed 18-year-old Ramarley Graham into his home and executed him, NYPD-style, for trying to flush a small amount of marijuana before they arrested him.

Graham was unarmed when he was executed by police.

Graham's grandmother witnessed the shooting and was brought down to the precinct and worked over for hours as cops tried to get her to change her account of what happened.

One officer has since been charged with manslaughter in the case.

But we know how the justice system works in New York, don't we?
Posted by reality-based educator at 12:53 PM