Death From The Skies: U.S. Kills 13 In Pakistan In Three Separate Drone Attacks 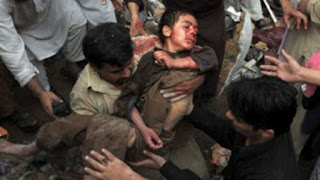 To celebrate the end of Ramadan, President Barack Obama ordered some drone attacks on Pakistan:

A flurry of US drone attacks pounded northern Pakistan over the weekend, killing 13 people in three separate attacks, officials and witnesses said on Sunday.

The attacks came as Pakistanis celebrate the end of the holy month of Ramadan with the festival of Eid al-Fitr.

He said the death toll was based on intercepted conversations between the militants.

Later on Sunday, another drone attack killed two people and injured two others near the site of the previous attack, said two intelligence officials.

The dead were local Taliban and fighters from the southern province of Punjab, said security officials and a tribal source.

Sure they were local Taliban fighters.

I believe everything my government tells me.

Except when they, you know, lie and cover things up.

Notice how they pick celebratory times so they can maximize the killing?

Or better yet, how they pick funerals of drone bomb victims as perfect opportunities for another drone bomb strike?

Or best yet, how they target the rescuers who flood the scene of a drone attack to help the victims?

What great American efficiency! Kill the people who show up at the scene of a drone attack with another drone attack!

Remind me again how the murderous fucker in the White House won a Nobel Peace Prize?

Actually I guess he fits in with another murderous fucker who won the Nobel Peace Prize - Henry Kissinger.

Posted by reality-based educator at 11:57 AM