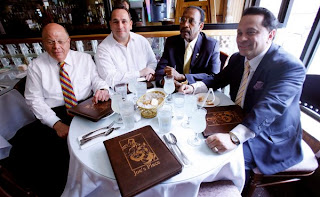 I'm going to leave the rebuttal of the ridiculous charge made by State Senator Ruben Diaz Sr. that the teachers union protects sex predator teachers to my friend, NYC Educator, who does an admirable job of dispensing with that myth here.

But so long as State Senator Ruben Diaz Sr. is smearing innocent people as "sex creeps" and "sex predator teachers" even though they have been exonerated of allegations and charged with no crimes, I'm wondering if we can talk about how it is he has managed to avoid indictment up there in Albany.

Diaz was connected to a corruption scandal that took out his pal, Pedro Espada (now serving five years in prison) back in 2012.

Here is how the NY Post described that scandal in March of that year:

It was a tough week for state Sen. Ruben Diaz Sr.

On Monday, Attorney General Eric Schneiderman announced the indictment of Clement Gardner, CFO of the Christian Community Benevolent Association — a nonprofit founded by Diaz in 1977 and which he ran until 2003.

On Wednesday, the federal corruption trial of Diaz’s friend and former colleague, ex-Sen. Pedro Espada, got under way.

In charges first brought to light in years of Post reporting, Espada is accused of looting hundreds of thousands from the Medicaid-funded Soundview Health Care Network to finance his lavish lifestyle and employ numerous relatives and associates.

The two cases shed light on New York’s kleptocratic culture, in which politicians use taxpayer dollars to enhance their political and personal status.

Schneiderman charges that Gardner embezzled as much as $400,000 from CCBA between January 2004 and May 2007 — a time when Diaz was showering the organization with cash through the corrupt member-item pork-barrel process.

Between 2003 and 2005, Diaz and his son, then-Assemblyman (now Bronx Borough President) Ruben Diaz Jr., reportedly directed $940,000 in member-item support to CCBA — a charity for the elderly and needy that would contribute nice sums to other Diaz-connected political organizations. In 2006 and 2007, Diaz the elder authorized another $500,000.

So, with $1.4 million in public money pouring in, should anyone be surprised that CFO Gardner — also Diaz’s onetime campaign treasurer — opted to help himself to some of the goodies?

Well, thanks for the clarity, senator.

That sentiment perfectly captures the essence of the culture: It’s about “giving,” all right — giving away other people’s money to friends, family members and “community” cronies.

Clearly, Espada was a “giving” guy, too — giving Soundview-related jobs to his uncle, son, daughter-in-law and son’s mistress, among others.

Whether Diaz turns out to be as nakedly crooked as Espada remains to be seen — that’s a pretty high standard — but both stand as poster boys of an ingrained, corrupt culture of spreading around taxpayer dollars for political and private gain.

Espada isn't the only convicted criminal Diaz liked to pal around with.

As the NY Times reported in March 2012, two other close political associates and friends of Diaz's, Carl Kruger and Hiram Montserrate, are also in prison for corruption.

Ruben Diaz, along with Espada, Montserrate and Kruger, was once part of a group of State Senators so close they were known as the "Four Amigos."

You can see the "Four Amigos," sans prison stripes, enjoying a bite to eat in the photo at the top of this post.

Diaz is the only one at that table not currently serving time in prison on corruption charges.

Somehow Diaz has managed to escape indictment, but given how close he was to the other three criminals and given all the funkiness around his non-profit, you can see where some might question his innocence.

Diaz himself scolded the press for convicting him in the public discourse when no charges have been filed against him by federal or state prosecutors but he seems to have no problem doing the same to NYC schoolteachers.

You see, in Diaz's world, allegations are enough to prove guilt and convict - at least when it comes to teachers.

But under that worldview, shouldn't Ruben Diaz Sr. be sharing a prison cell with his friends and partners in crime, Pedro Espada, Hiram Montserrate and Carl Kruger?

I mean, it's hard to believe he wasn't stealing along with his other three good amigos.

Sure, we don't have any proof of that criminal action, but who needs proof, facts or evidence when allegations alone are enough to prove guilt and convict?
Posted by reality-based educator at 3:07 PM