Why Is Randi Weingarten Willing To Fight TIME Magazine For Teacher Bashing, But Not Andrew Cuomo?

For the past couple of weeks, AFT President Randi Weingarten has been fighting the good fight against TIME Magazine for running this cover: 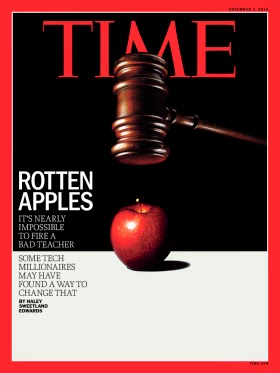 Weingarten fumed on social media over the TIME cover and mobilized her union cohorts and followers to try and force TIME to "apologize" for the cover. Weingarten, who also loves to write letters, wrote TIME a letter to tell the editors just how wrong they are about teachers. You can see that letter here.

Much of the subscriber and newsstand customer base was lost years ago, but even in the past seven years TIME has shed nearly a million subscribers, going from over 4 million a week to just over 3 million a week.

This is not a news magazine that anybody is actually reading anymore, though Weingarten certainly did them a favor by publicizing the "Rotten Apples" cover and providing them some click bait that might have translated into a few extra ad dollars and maybe a subscription or two from some ed deformer fans.

As for what harm Weingarten's campaign against TIME did to them, well, perhaps her attacks against the magazine caused some teachers to cancel their personal or classroom subscriptions although to be honest, I don't know any teachers who have either of those.

In the end, it was probably a wash for TIME and the Rotten Apples Apology Movement Weingarten led - TIME perhaps gained a bit of ad revenue from the extra clicks, perhaps lost a few subscriptions from some teachers.

One thing they did get that they haven't had for a while - people talking about TIME Magazine as if it mattered in any substantial way.  That may not have been Weingarten's goal in the battle, but that certainly was one of the consequences.

Now I must admit, I didn't actually pay much attention to any of this.

As I noted earlier, from the time TIME Magazine first ran their infamous Michelle Rhee broom cover in 2008 to now, they've lost a lot of circulation and subscriptions, so my feeling was, whatever shows up on their cover doesn't really matter much anymore.

TIME Magazine is a lot like the Sunday news shows on ABC, CBS, NBC, CNN and FOX - there's a lot of bluster going on, a lot of "serious people" doing some "serious talk" about "serious issues" that nobody outside of the Beltway and their own insular circle is seriously listening to.

Cuomo told the New Daily News Editorial Board the following:

ALBANY — Vowing to break “one of the only remaining public monopolies,” Gov. Cuomo on Monday said he’ll push for a new round of teacher evaluation standards if re-elected.

Cuomo, during a meeting with the Daily News Editorial Board, said better teachers and competition from charter schools are the best ways to revamp an underachieving and entrenched public education system.

“I believe these kinds of changes are probably the single best thing that I can do as governor that’s going to matter long-term,” he said, “to break what is in essence one of the only remaining public monopolies — and that’s what this is, it’s a public monopoly.”

He said the key is to put “real performance measures with some competition, which is why I like charter schools.”


Cuomo then doubled-down on those "monopoly" comments later:

A firestorm ignited between several state public education advocacy groups and New York Gov. Andrew Cuomo over remarks he made to the New York Daily News editorial board published Monday—in which he threatened to “break” what he deemed “one of the only remaining public monopolies,” New York’s public school system—grew hotter Wednesday, with more groups joining in his criticism.

Cuomo vowed to offer competition to public schools in order to raise the bar on the current education system via an expansion of charter schools and punitive teacher evaluation systems if re-elected. He dismissed educators’ and parents’ concerns about tying teacher evaluations to standardized test scores—a practice that has come under enormous scrutiny since the botched roll-out of the Common Core curriculum two years ago.

Despite the initial backlash, Cuomo reiterated the controversial statements later that day during a tour of Mineola Middle School intended to showcase his Smart Schools Act proposal, which would provide up to $2 billion in tech funding for schools throughout the state if approved by public referendum on Nov. 4.


Cuomo also attacked teachers in his initial comments to the Daily News Editorial Board:

Cuomo said he will push a plan that includes more incentives — and sanctions — that “make it a more rigorous evaluation system.”

Cuomo expects fierce opposition from the state’s teachers, who are already upset with him and have refused to endorse his re-election bid.


Cuomo's teacher evaluation system is a disaster, with superintendents in the Lower Hudson Valley saying it takes too much time, energy and resources to implement and does nothing to improve teaching and learning.

From the perspective of teachers, the system does much harm since no matter how excellent a teacher you are, you can be found "ineffective" in this system.

The first lawsuit against the system was launched this past week by a widely respected teacher whose students all passed their state tests but was nonetheless deemed "ineffective" by Cuomo's evaluation system based upon her students' test scores:

Sheri G. Lederman has been teaching for 17 years as a fourth-grade teacher  in New York’s Great Neck Public School district. Her students consistently  outperform state averages on math and English standardized tests, and  Thomas Dolan, the superintendent of Great Neck schools, signed an affidavit saying “her record is flawless” and that “she is highly regarded as an educator.”

Yet somehow, when Lederman received her 2013-14 evaluation, which is based in part on student standardized test scores, she was rated as “ineffective.” Now she has sued state officials over the method they used to make this determination in an action that could affect New York’s controversial teacher evaluation system.

How is it that a teacher known for excellence could be rated “ineffective”?

The convoluted statistical model that the state uses to evaluate how much a teacher “contributed” to students’ test scores awarded her only one out of 20 possible points. These ratings affect a teacher’s reputation and at some point are supposed to be used to determine a teacher’s pay and even job status.

Lederman filed her lawsuit against New York State Education Commissioner John King Jr., Assistant Commissioner Candace H. Shyer and the Office of State Assessment of the New York State Education Department, challenging the rationality of the VAM model being used to evaluate her and, by extension, other teachers. The suit alleges that the New York State Growth Measures “actually punishes excellence in education through a statistical black box which no rational educator or fact finder could see as fair, accurate or reliable.”

The lawsuit shows that Lederman’s students traditionally perform much higher on math and English Language Arts standardized tests than average fourth-grade classes in the state. In 2012-13, 68.75 percent of her students met or exceeded state standards in both English and math. She was labeled “effective” that year. In 2013-14, her students’ test results were very similar but she was rated “ineffective.”  The lawsuit says:


This simply makes no sense, both as a matter of statistics and as a matter of rating teachers based upon slight changes in student performance from year to year.


This is the system that Cuomo plans to revise so that it has "sanctions," the system that Cuomo claimed in a 245 page campaign policy document was one of the best teacher evaluation systems in the nation, though he did complain last month that it needed to be revised because not enough teachers were being found "ineffective."

Imagine that - Cuomo wants to strengthen a system that rates one of the most widely respected teachers in the Great Neck School District "ineffective" based upon some voodoo value-added measurements because not enough teachers are being rated "ineffective."

Now you'd think after Andrew Cuomo twice attacked the public school system as a "monopoly" that he planned to "break" in his second term and threatened to "strengthen" his teacher evaluation system with "real sanctions" for teachers even though it's a disaster that unfairly rates teachers, Randi Weingarten would have put down her TIME Magazine for a minute and joined the outrage many New York educators expressed on social media over Cuomo's comments.

But you'd be wrong about that - instead Weingarten defended Cuomo:

ALBANY—American Federation of Teachers president Randi Weingarten attributed Governor Andrew Cuomo’s characterization of public education as a “monopoly” to last-minute campaign rhetoric and called on teachers angered by the governor’s comments not to vote for G.O.P. candidate Rob Astorino as an alternative.

“We’re in the political season. At the end of the day, … I’ll chalk it up to politics,” Weingarten told Capital on Friday when asked about the governor’s comments earlier in the week to the Daily News' editorial board.


Now as I noted above, Cuomo doubled down on his "monopoly" comments later, so it's difficult to see how Cuomo's threats to "break" public schools is anything but a threat, but Weingarten managed to do so in an interview with Capital NY's Jessica Bakeman.

"I decided I would actually write him a letter explaining why public education isn’t a monopoly but a public good, a moral imperative and a constitutional mandate in New York,” she said. “I really decided to spell that out, not in the high-pitched moment of the last few days of a gubernatorial election, but privately, in a letter. Because the values of public education are so important that we really have to have a real conversation about it.”


More jive from Weingarten here - if ever there was a time to go public with a conversation about public education, it's now, during the heat of a campaign, when a politician still has to worry about his re-election numbers.

But instead of taking Cuomo on the way she took on the TIME cover, Weingarten defends Cuomo's comments as nothing more than "campaign rhetoric" and says she's having a "private conversation"  with Cuomo about this matter.

One thing I've noticed about Weingarten over the years - if there's ever a symbolic fight she can take on that will have little-to-no impact on the damages being done to public schools, teachers and the teaching profession by the ed deform movement, Randi is all in.

But whenever there's a moment when she can fight to defend public schools, teachers and the teaching profession from politicians who are doing real damage to all three, she's instead defending those politicians, or robocalling for them, or diverting attentions from the damage they're doing.

That's EXACTLY what Randi Weingarten is doing here - happy to take on TIME in a symbolic fight that is essentially meaningless while declining to fight - nay, worse, defending - a neo-liberal politician like Andrew Cuomo who plans to "break" the public school system in his next term.

Why not fight both fights - the symbolic fight against TIME and the real fight against a politician with a personal vendetta against teachers and public schools who plans to destroy both in the next few years?
Posted by reality-based educator at 9:26 AM