Great Way For Christie To Go Out (SECOND UPDATE) 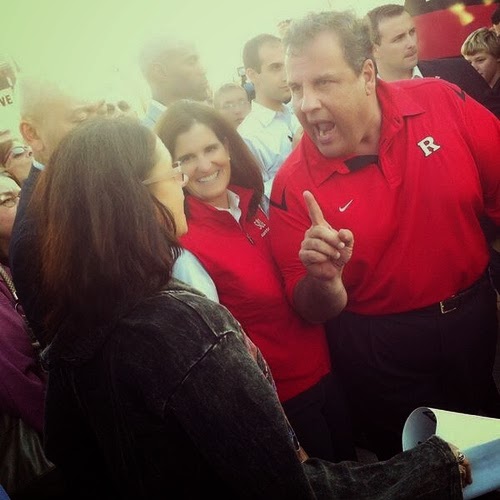 The NY Times is reporting that indictments in the Bridgegate investigation are expected soon, perhaps as early as next week.

Commenters over at NJ.com are speculating on just who's going to get indicted.

Many are hopeful Christie himself will be indicted and one has a fantastic idea:

Wouldn't it be great if Christie were arrested in public at a town hall meeting. Probably won't happen, but would be a great "news" moment.

But it's probably not going to happen.

I'm not even that sure Christie got a real legal problem here.

If the indictments go as high as David Samson, then Christie's got serious problems, since Samson probably has enough on Christie to make a swell federal witness.

But anything less than a Samson indictment and Christie's got some political fallout to deal with but probably no legal problems.

In any case, it's very exciting and I must admit, I feel a little like a kid waiting for Christmas to see if Santa brought me what I wanted - a multiple count indictment for Chris Christie and a perp walk in handcuffs.

This is from the Bergen Record tonight:

The Port Authority on Wednesday provided its most detailed accounting yet of what federal investigators are focused on in the 15-month probe that grew out of the George Washington Bridge lane closure scandal.

The disclosure, in a notice to potential buyers of Port Authority bonds, indicates that federal prosecutors have issued grand jury subpoenas demanding a wide range of documents related to a flight route United Airlines created between Newark and Columbia, South Carolina — close to a weekend home of Port Authority Chairman David Samson. The route, which Samson referred to as the “chairman’s flight,” according to one source, was cancelled three days after Samson resigned last year.

The Record reported in February that federal authorities had asked the Port Authority for Samson’s personal travel records and communications with United and its lobbyist. But the disclosure says authorities also asked for records of any travel by Samson’s family members or guests.

The subpoenas also demand information about several matters that were the subject of negotiations between the Port Authority and United while Samson was chairman, including United’s construction of a wide-body aircraft maintenance hangar and the airline’s lease of land to build the hangar.

The Port Authority also received a letter from federal authorities in New Jersey requesting that the agency preserve all records concerning the redevelopment of two terminals at the airport, Terminal A and Terminal C, as well as United’s lease of Terminal C. United operates most of its flights out of Terminal C.

Authorities also want the Port Authority to save documents related to the extension of the PATH train line to Newark Airport — a project that United had pushed for in recent years — and United’s flights out of Atlantic City. The airline’s service in Atlantic City was hailed by Governor Christie as part of the city’s rebirth, but it lasted less than a year.

The disclosure also lists subpoenas issued by other agencies investigating the Port Authority and its former officials. The Manhattan District Attorney’s Office, it states, has asked for records related to the observation deck at One World Trade Center.

The contract to manage the operation deck was won by Legends, a company partly owned by Dallas Cowboys Jerry Jones, who Christie has said was a friend. That relationship stirred controversy late last year when Jones flew Christie to a playoff football game and hosted him in the owner’s suite, raising questions about whether the personal relationship influenced the awarding of the observation deck contract. Christie has denied any connection.


Judging by what the feds are subpoenaing, Samson's got real problems.

And if Samson's got problems, well, Chris Christie's got them too.

A close political confidant and adviser to Governor Christie who has been the subject of an ongoing federal investigation arising out of the George Washington Bridge scandal said Tuesday that he is leaving the powerful law firm that he founded decades ago. And the firm, Wolff & Samson, is erasing David Samson’s name from the front door, a move that some see as an effort to protect the firm from any potential fallout that may lie ahead.

“For personal, professional and health reasons, I have made the decision to retire,” Samson, 75, said in a statement issued by his spokeswoman, Karen Kessler. “After my five decades practicing law, it was time for new leaders to transition the firm for the future.”

The name change — to Chiesa Shahinian & Giantomasi PC — erases any trace of Samson, a rare decision for a law firm that has built a recognizable brand over several decades.

“If he is just going into retirement, it’s very unusual to change the name of an established firm out of the blue,” said Micah Buchdahl, a Moorestown attorney who works with law firms on business development and marketing strategy. “If you’re a well-known entity, as Wolff & Samson was, you don’t just throw it away without careful consideration.”

Now the only question is, does he turn on Christie?
Posted by reality-based educator at 9:16 PM