Cruella de Black Hears It From The Crowd 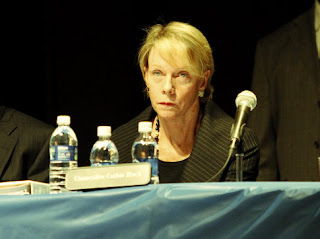 And puts her foot in her mouth once again!

New schools chancellor Cathie Black got an education in rowdiness at her first education policy meeting.

Black was repeatedly interrupted by boos and catcalls by the roughly 200 parents, students and teachers assembled in the Brooklyn Technical High School Wednesday night.

She managed to plow her way through a four-minute prepared speech but later was taunted by parents waving condoms in the air, in reference to her unpopular joke last week that "birth control" might solve downtown Manhattan's school overcrowding crisis.

"We know that we need to help those who need it most," Black told Wednesday night's crowd.

"Then why do you want to close all those schools?" called out one of the many teachers who came from one of the 26 schools slated for closure by the Education Department.

Panel for Educational Policy chairman Tino Hernandez warned the crowd to conduct themselves "with decorum."

Black sat mostly stone-faced through the more than four-hour meeting. When she responded to the one direct question she received from long-time panel member Patrick Sullivan, she referred to him as "Mr. Cunningham."

Scores of students and teachers from the John Jay campus in Park Slope came to protest the department's decision to put an elite school into the building, which houses mostly poor and mostly black and Latino students.

In a rare example of a principal speaking out publicly against department policy, Jill Bloomberg, of Secondary School for Research, said that the placement of Millennium Brooklyn was an example of putting the interests of upper income white families above those of low-income families of color.

When she went a few seconds over her allotted time, the panel turned off the sound on Bloomberg's microphone. She finished her speech by shouting and led the crowd in a chant, "Integration, yes; segregation, no."

John Jay students and parents are outraged that extra money will be provided to the deteriorating campus only if Millennium is placed in the building.

"You are saying that our school isn't good enough for Park Slope residents," said Kwaesi Laguer, 16, an 11th grader at the Secondary School for Law on the John Jay campus. "Why don't you use the money to help make our schools better?"

The panel voted in favor of moving Millennium into the John Jay campus with 10 members voting in favor, two abstaining and none opposed.

Perhaps she thought she was on a Happy Days episode?

Or maybe those bottles in front of her were full of vodka and gin, not water?

In any case, the policies are the same with Cruella in charge as they were when Herr Klein was in charge - starve traditional schools of funds, hand money to politically connected schools and/or charters, tune out what teachers, principals and parents have to say.

People were waving condoms at Ms. Black last night, mocking her for her comments about birth control as the solution for school overcrowding.

Next PEP, she ought to be showered with streams of toilet paper for all the crap she and her boss bring to the system.

And for the fact that she looks shit-faced at the meeting.

Uh, bartender, I'll have another drink - and make it a double!
Posted by reality-based educator at 2:37 PM