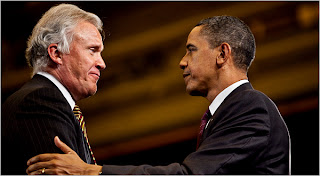 More change we can believe in, if by change you mean selling out to corporations:

SCHENECTADY, N.Y. — President Obama, sending another strong signal that he intends to make his White House more business-friendly, traveled to this industrial city on Friday to appoint a prominent corporate executive as his chief outside economic adviser, and to spotlight his efforts on job creation, in advance of next week’s State of the Union address.

Here in the birthplace of General Electric, where the company’s historic brick edifice and iconic neon-script logo loom over downtown, Mr. Obama turned to Jeffrey R. Immelt, the company’s chairman and chief executive, to run his outside panel of economic advisers. Mr. Immelt succeeds Paul A. Volcker, the former Federal Reserve chairman, who is stepping down.

The selection of Mr. Immelt, who was by Mr. Obama’s side during his trip to India last year and again this week during the visit of President Hu Jintao of China, is the latest in a string of pro-business steps the president has taken. He has installed William Daley, a former JPMorgan Chase executive, as his chief of staff; has scheduled a major speech to the U.S. Chamber of Commerce next month; and ordered federal agencies this week to review regulations with an eye toward eliminating some.

Labor, of course, will not be a part of any substantive policy discussions or have any real voice in administration policy. As First Read put it today:

"It's also worth noting that in announcing this new Council on Jobs and Competitiveness, the president turned to a CEO. He's not making a labor leader as co-chair. Yes, labor leaders will be ON the council, but the Immelt appointment sends the message: business first."

Tell me exactly when that isn't the message?

Can't recall a time, even in this supposedly "Socialist" administration, when the message wasn't "Fuck Labor!" and "Hey, BoA, need a 115 billion?"

POSTSCRIPT: Immelt in at the White House, Comcast owns NBC, and Olbermann is fired from MSNBC.

November 2008 seems like a world away.
Posted by reality-based educator at 5:19 AM