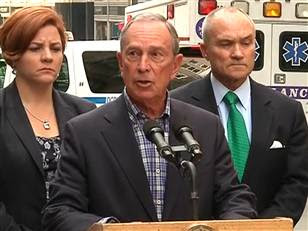 Christine Quinn stands behind Mayor Bloomberg as he updates the press on the gun battle at the Empire State Building in which two NYPD officers killed a gunman and wounded nine bystanders.

Not too hard to see what Quinn and Bloomberg are thinking with this kind of photo op.

The line of succession is clear.

Yes, it's her district.

But that's not why she's there at this kind of press conference that's going to receive national coverage.

She's there to give her the veneer of leadership.

Posted by reality-based educator at 10:51 AM