King called the US government "the greatest purveyor of violence in the world today", as well as the leading exponent of "the deadly Western arrogance that has poisoned the international atmosphere for so long" (is there any surprise this has been whitewashed from his legacy?). He emphasized that his condemnations extended far beyond the conflict in Southeast Asia: "the war in Vietnam is but a symptom of a far deeper malady within the American spirit." He insisted that no significant social problem - wealth inequality, gun violence, racial strife - could be resolved while the US remains "a nation that continues year after year to spend more money on military defense than on programs of social uplift" - a recipe, he said, for certain "spiritual death". For that reason, he argued, "it should be incandescently clear that no one who has any concern for the integrity and life of America today can ignore the present war." That's because:


"If America's soul becomes totally poisoned, part of the autopsy must read Vietnam. It can never be saved so long as it destroys the deepest hopes of men the world over."

Working against US imperialism was, he said, "the privilege and the burden of all of us who deem ourselves bound by allegiances and loyalties which are broader and deeper than nationalism and which go beyond our nation's self-defined goals and positions." For King, opposing US violence in the world was not optional but obligatory: "We are called to speak for the weak, for the voiceless, for victims of our nation and for those it calls enemy . . . ." The entire speech is indescribably compelling and its applicability to contemporary US behavior obvious. I urge everyone who hasn't already done so to take the time to read it.

Barack Obama's grand inaugural ceremony will take place today on the holiday memorializing King's birthday. Obama will always be linked in history to King because his election (and re-election) as America's first African-American president is, standing alone, an inspiring by-product of King's work on racial justice. But this symbolic link has another, less inspiring symbolic meaning: Obama's policies are a manifestation of exactly the militaristic mindset which King so eloquently denounced. Obama has always been fond of invoking King's phrase "fierce urgency of now", yet ironically, that is lifted from this anti-war speech, one that stands as a stinging repudiation of the continuous killing and violence Obama has spent the last four years unleashing on many countries around the world (Max Blumenthal suggested that Obama's second inaugural speech be entitled "I have a drone").


And just so that the consequences of Barack Obama's drone bombings aren't theoretical, here's a couple of photos of victims of Obama's drone strikes: 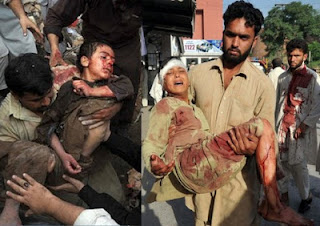 On November 15, 2012, Dennis Kucinch addressed the Congress on these policies:

“According to The Washington Post, the Obama administration is working on efforts to institutionalize the practice of targeted killings by unmanned drones abroad. The volume of these killings challenges the morality and the legality of the attacks. We are creating a precedent for other nations that are developing the same technology. China has just unveiled a new drone”, he said.

“The drone program has thus far been conducted with no oversight from Congress or any judicial body. Congress has a constitutional responsibility to ensure that programs that are being conducted in the name of our Nation are legal, transparent, and accountable.


On the day that Barack Obama takes his second oath of office with his murderous hand on a Bible once owned by Martin Luther King, I think it's important to point out that Barack Obama has more in common with Henry Kissinger, Robert McNamara, Dick Cheney, Donald Rumsfeld, Richard Nixon, and George W. Bush than Martin Luther King.
Posted by reality-based educator at 10:43 AM