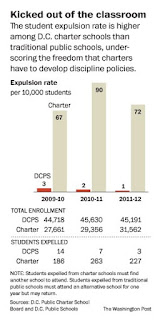 The District’s public charter schools have expelled students at a far higher rate than the city’s traditional public schools in recent years, according to school data, highlighting a key difference between two sectors that compete for the District’s students and taxpayer dollars.

D.C. charter schools expelled 676 students in the past three years, while the city’s traditional public schools expelled 24, according to a Washington Post review of school data. During the 2011-12 school year, when charters enrolled 41 percent of the city’s students, they removed 227 children for discipline violations and had an expulsion rate of 72 per 10,000 students; the District school system removed three and had an expulsion rate of less than 1 per 10,000 students.

The discrepancy underscores the freedom that charters — publicly funded schools that operate independently of the traditional school system — have from school system policies. That autonomy defines the charter movement and gives its schools considerable latitude to decide what student behavior they will — and won’t — tolerate.

Parents and activists say some charters expel excessively and with little oversight, shedding disruptive students who then end up enrolling mid-year in the traditional school system, which is legally bound to take them.

Charter operators claim they do not expel kids they don't want, but the Post story notes the following:

The District’s Office of the State Superintendent of Education in August proposed rules that would govern discipline policies at all public schools, including charters. They called for minimizing suspension and expulsion of children 13 and younger and outlined due process rights for students. Charter leaders mounted a vigorous opposition, saying the federal law that established D.C. charters frees them from such local mandates.


Ah, yes - they don't look to push challenging students out of our charter schools, but they fought rules that would bar them from doing so and want to keep the rules rigged in their favor:


Critics see schools that don’t have the same legal obligation as the traditional school system to serve all students.

Charter schools can write and enforce discipline policies that make it possible to remove students who are needy or challenging, said Suzanne Greenfield of Advocates for Justice and Education, an organization that offers free legal assistance to students facing expulsion.

And, under current city rules, schools that expel students after Oct. 5 — the city’s official school census date — get to keep the thousands of dollars in funding they receive for each student.

“It’s saying, if we decide your behavior is inappropriate for our school, we don’t have to take you anymore,” Greenfield said. “If you’re taking taxpayer money, why should you be able to do that? That’s the part that seems fundamentally skewed.”


And while we're talking about suspensions, let's not forget to also talk about the ridiculously high attrition rates so-called "high performing" charter schools like KIPP have:

KIPP charter middle schools enroll a significantly higher proportion of African-American students than the local school districts they draw from, but 40 percent of the black males they enroll leave between grades 6 and 8, says a new nationwide study

by researchers at Western Michigan University.

“The dropout rate for African-American males is really shocking,” said Gary J. Miron, a professor of evaluation, measurement, and research at the university, in Kalamazoo, and the lead researcher for the study. “Kipp is doing a great job of educating students who persist, but not all who come.”


Just another way charter schools fix it so that public schools have to deal with the most challenging students while they get to cream and skim and expel to their heart's content.
Posted by reality-based educator at 10:18 PM