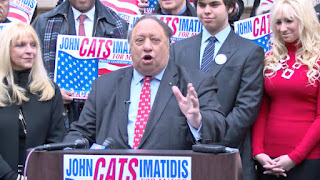 John A. Catsimatidis, the billionaire owner of the Gristedes grocery chain, stood on the steps of City Hall on Tuesday and announced that he would seek the Republican nomination for mayor of New York City.

Then he started talking about his suit.

“I think my wife paid $100 for this jacket,” Mr. Catsimatidis, who bills himself a “common billionaire,” said as he gripped the lapel of a plus-size Jos. A. Bank blazer. “I’m not wearing a $5,000 suit.” He warned his daughter, standing nearby, that he would not be buying her an $80 million apartment. Later, he added, “I feel the people’s pain.”

“There were times in the ’80s,” Mr. Catsimatidis, a 64-year-old Upper East Sider, said, “when I was afraid to walk from Fifth Avenue to Madison Avenue.”

But Mr. Catsimatidis, who appeared to be enjoying himself immensely during Tuesday’s event, does have an estimated $3 billion fortune — more than enough to mount a formidable advertising operation and, at the very least, be a thorn in the side of a crowded Republican field of candidates who are little known to the public.

I for one am excited that Mr. Catsimatidis is running for mayor because I love his supermarkets.

Who doesn't love going to Gristedes and paying $3.79 a pound for bruised tomatoes, buying food that's been frozen/defrosted/frozen/defrosted and frozen again or counting the rodent droppings on the floor near the deli counter?

Hell, overpaying for rotten produce because the owner of the business knows your stuck in Manhattan and the Food Emporium is even worse is as New York as you can get.

Now I know the "chattering classes" and the power elites aren't looking to support Mr. Catsimatidis because they think he's a bit of a goofball.

But that's a shame, because Mr. Catsimatidis has all the right qualifications to be mayor.

First of all, this guy knows customer service - just take a look at some of the Yelp reviews from customers:

This place has always been terrible...rotting produce, exorbitant prices, selling things that are long past their expiration date, etc. But now I can say from first hand experience that this place is truly the worst. I got severe food poisoning from some ice cream sandwiches I purchased there. Clearly they are selling food that has melted and refroze. When a store is dirty and expensive, that's one thing, but when you cannot trust their food, which is liable to make you deathly ill, that's another. Stay away from this place, or at least stay away from the perishables! Patronize at your own peril.

Once considered a high-priced, upscale chain, Gristede's has been in a steady decline since it was purchased by Sloan's. This particular location boasts dirty floors, dusty shelves, a peculiar odor - possibly from the rotting produce - and a not surprisingly indifferent staff, given they're working under the supervision of a manager who fails to grasp the concept of customer service. In an area bereft of decent supermarkets, it's difficult to avoid, but be sure to check expiration dates, because merchandise seems to sit here indefinitely. (When I made the aforementioned manager aware that milk was three days past its prime, he saw no reason to remove it from the display case, but offered to refund my money if I discovered it had soured!)

The gristedes near me (96th and Broadway) is so bad that my girlfriend and I refer to it as "the methadone clinic."  That is what the people there remind me of.  It is far from clean looking (although I'm sure its basically hygenic), the produce is a joke, and the entrance is down a ramp on a dark sidestreet with no other businesses notorious for garbage, rats, and stuff I don't even want to know about.  I have heard multiple cashiers cursing customers and management out loud as they bagged groceries.  The clientele ranges from nervous looking local professional types to the criminally insane and unwashed.  They are also terminally understaffed for good measure so the lines are long.  Good times all around, at least it's generally cheaper than gourmet garage.

Ew. Indeed a depressing place. Not fresh, not cheap, not clean.

Soo dirty (and not in a good way). The only things I've ever bought here are packaged goods. And yet, there always seems to be a line, no matter how empty and desolate the store may be. If it's possible, the place is made all the more depressing by the lighting, with its old sanitarium style flair. Last time I was there, a washed up actor was talking loudly about her upcoming projects, and that desperation, I think, captures the place exactly.

Can't you see a guy who runs grocery stores like that running the Department of Education?

The second reason why I am supporting John Catsimatidis for mayor is because he and his family just look like winners and I really think they'll reflect well on New Yorkers as a whole.

Here, for example, is the Christmas card the family sent out in 2012 to friends and family: 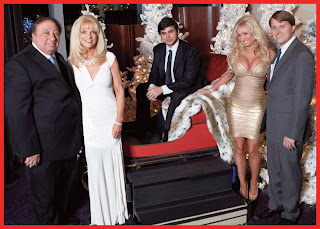 We've had 12 years of that frump, Mayor Bloomberg, and his lady friend, Diana Taylor.

Don't we need some celebrity glamor in City Hall and Gracie Mansion?

I think we do, and let's face it, doesn't that Catsimatidis family Christmas card just ooze glamor and celebrity.

I think it does.

Hell, I'm finally getting excited about the 2013 mayoral campaign now that we have a real formidable candidate in the race.

I was worried we were going to get stuck with Bloomberg Jr., er, Christine Quinn or worse, Giuliani budget director/MTA chief Joe Lhota.

But now I think we just might get the next Fiorello La Guardia in the form of John Catsimatidis.