The Rage Against Bloomberg Grows In Staten Island 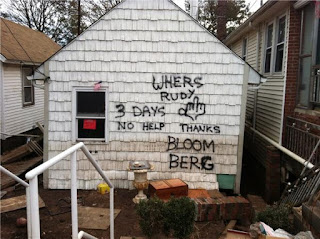 Bloomberg was busy being fellated by a bunch wealthy white people on the UES who never lost power and suffered no damage from Superstorm Sandy for the "great job" he's doing with the city's storm response.

She spent her life helping people — only to be abandoned in her own time of need.

Rose Winfield, 72, was aghast at the lack of aid for Staten Island in the wake of the horrific trail of destruction left by Sandy.

“It’s hell out here. We are literally the forgotten ones,” said Winfield, as she stood in the darkened, dangerous yards of the Kramer Street housing project in the South Beach neighborhood.

“People in these houses are starving. Parents have newborn children who are freezing, we’ve been the last ones to get help,” said Winfield, noting that she worked for years as a city housing advocate and chairperson of a drug program in Brooklyn.

“Now, I’m not getting the help I need,” said Winfield, who is legally blind and has cancer.

The elderly woman was forced to postpone a chemotherapy treatment, scheduled at Sloan- Kettering on Wednesday, because she had no way to get there and no way to reach out for help.

Police presence has been minimal, at best, Winfield said.

“We’re living in the worst conditions as it is. But because of the darkness, there’s been so much shooting and hollering outside my window. It’s incredibly scary.”

The arrival of FEMA, the Red Cross, and electricity late yesterday offered little comfort, said Winfield, convinced it’ll be days more before any real help arrives in her neighborhood.

“They don’t give a damn about us out here,” she said.


Bloomberg and the geniuses around him - Wolfson, Wolcott, Kelly, and the rest of the Bloomberg LP Mafia - do not care about these people.

We have a Katrina situation unfolding right before our eyes here in NYC and Bloomberg was busy trying to get the freaking NYC Marathon going for the past few days.

I don't understand how it is he is not taking damage from this yet.

This is Bloomberg's incompetence and is no different than the incompetence we saw after the Bloomberg Blizzard/Boxer Day Storm of 2010.

I have to think that the reporters and journalists covering the Sandy stories are afraid to criticize him for fear he will one day own their newspapers and he'll be their boss.

Because so far Bloomberg is getting a pass on these travesties and tragedies - from the Rockaways to Coney Island to Staten Island to Gerritsen Beach, we're seeing wholesale destruction and now Katrina-like squalor and horror.

But Bloomberg thinks he's doing a "great job" at the response, and so do his wealthy, white cronies on the UES.

Bloomberg needs to stop with the bullshit - the races and the PD days for teachers and the presidential endorsement announcements - and GET THESE PEOPLE HELP.
Posted by reality-based educator at 7:21 AM