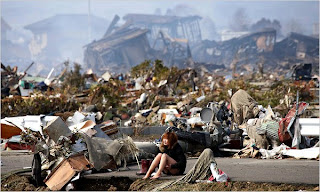 The above photo was taken in Natori, Japan. I think the picture says much about the horror that the Japanese people are suffering.

Meanwhile at CNBC, Larry Kudlow is still grateful that the human toll is greater than the economic toll of the disaster.

Isn't it refreshing to have a voice of the Masters of the Universe say what they're really thinking?

You know, I have watched CNBC in the past and I have to say, the network is home to some of the scummiest people on the planet not employed by Rupert Murdoch.

Kudlow is just slightly more honest about his feelings then Maria, Erin, Cramer and the rest of the gang.
Posted by reality-based educator at 7:05 PM