Did Families For Excellent Schools Use A Success Academies Student For Their Racist "Frowning Black Child" Ad? 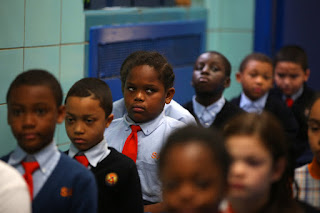 The hedge fund-backed Families for Excellent Schools is releasing the following attack ad on de Blasio ahead of their "It's not a political rally" rally on September 30:

The ad features two young boys, one white, with blonde hair, blue eyes and a blue shirt, the other black, with a buzzcut and a red shirt.

The clip puts into stark terms the racial and class politics that FES and its allies have embraced in their fight against de Blasio over the last 18 months.

"Because he lives in a wealthy neighborhood, this 6-year-old will attend a good school," the ad's narrator says as the young white boy is walked to school by a white parent.

But when the black boy appears on the screen, the narrator says, "Because he lives in a poor neighborhood, this 6-year-old will be forced in a failing school."

The two boys briefly pass each other on the street as the narrator claims that the white child will likely go to college, while the black boy has little chance of ever attaining a college degree.

A split screen shows the two boys in school; the white boy is happily reading, while the black child is frowning, apparently bored, at his desk.


That ad has been called race-baiting and racist:

Luis Garden Acosta, the founder of El Puente Academy for Peace and Justice and the father of a child who attended a charter school, said FES was “race-baiting.”

“‘Race baiting’ like ‘red baiting’, exploiting the values and legitimate concerns of our city’s communities of color, for whatever political purpose, is abhorrent and posits a dangerous and expanding wedge in a city all to segregated by class, color and community,” Mr. Acosta stated, noting that Roberto Perez, a City Hall staffer, encouraged him to speak out. “It is abhorrent that a movement that emerged as a demand to tell the truth is used to obfuscate, divide and attempt to denigrate New York City’s progressive agenda”.

“They’re racist to the core. They know they are,” Bertha Lewis, the founder of the Black Institute, a civil rights nonprofit, told the Observer. “What the mayor needs to do, and I would stand right beside him, is call them out for the racists that they are. He needs to be able to do that. He needs to fight back.”


“These folks have figured out a way to make profit off the same kids that they disdained for years and years. As far as I’m concerned, its predatory education, subprime schools,” Ms. Lewis said. “Eva Moskowitz and none of them wouldn’t be doing this if it wasn’t making enormous profit. To then turn around and say, ‘Oh black people, I’m trying to save you from the big bad white man, the mayor, who wants to put you in a failing school’–that’s racist.”


Success Academies was caught offering some "messaging assistance" to Success parents over the September 30 political rally that theyinsist isn't political, threatening parents who don't show for it with the possibility that their kids won't get into a Success middle school or high school.

Success Acadamies is also infamous for its young white teachers who spew out abuse to students of color every day at school in the form of "discipline" and "high expectations" and treat the children like prisoners.

As the New York Times reported:


One consequence of the competitive environment is a high rate of teacher turnover. Some teachers who left said that the job was too stressful. Others said they left because they disagreed with the network’s approach, particularly when they believed it was taken to extremes. In an internal email that some former teachers said typified the attitude at some schools, one school leader said that students who were lagging should be made to feel “misery.” Suspension rates at Success schools, compared with public schools, are higher.

Former staff members described students in third grade and above wetting themselves during practice tests, either because teachers did not allow them to go to the restroom, which Ms. Moskowitz disputed, or because the students themselves felt so much pressure that they did not want to lose time on the test.

Jasmine Araujo, 25, who joined Success through the Teach for America program, quit after half a year as a special-education teacher at Success Academy Harlem 3. She now teaches at a charter school in New Orleans. “I would cry almost every night thinking about the way I was treating these kids, and thinking that that’s not the kind of teacher I wanted to be,” Ms. Araujo said.


The accompanying Times photo (see above) of Success Academies students says volumes about how the children at this school - almost all black - feel about being there.

It's ironic that the FES ad shows a frowning black child at his desk, purporting the child's school to be a public school under de Blasio's leadership, when actual photos in the infamous NY Times piece on Eva Moskowitz and her prison/school system show Success Academies students frowning and/or looking rather unhappy as the line up for another day of prison/school.

It's also ironic that Success Academies - which is largely made up of minority children - touts itself as a model for diversity and Eva Moskowitz touts herself as a civil right leader.

Given how her schools are so segregated, how badly she has her largely white teachers treat their black students, how often she threatens and manipulates the parents of those students, quite frankly FES and Success are more open to charges of racism than Bill de Blasio is.

And yet they go at de Blasio and call him the "racist" in this shameful ad.
Posted by reality-based educator at 11:06 AM