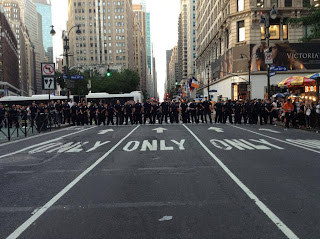 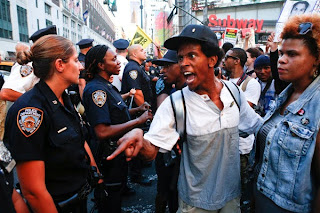 A wall of blue shirts, with the white shirts behind them to enforce discipline, greeted people protesting the Trayvon Martin verdict trying to march from Union Square to Times Square yesterday.

Just in case anybody out there is still under the impression they have constitutional rights or enjoy living in the "land of the free," these pictures ought to disabuse them of those erroneous beliefs.

We live in a police state, we have no rights and we are not free.

Meanwhile, in other news today, the U.S. killed nineteen brown people, er "militants," with a drone strike and military operation in Pakistan.

A whistleblower who has exposed the nexus between private enterprise and the Obama administration in the surveillance state cannot go to Venezuela for asylum because he fears the U.S. will force down his plane in international airspace, arrest him and take him into military detention where he will be tortured.

And the government is quite literally spying on everything we do - not to keep us safe but to keep us down.

If you want to express you're outrage at any of these crimes, from the Zimmerman verdict to the drone bomb crimes to the police state to the surveillance state, you'll be met by a wall of blue shirts with white shirts behind them to enforce discipline.

That's the United States these days.

If you're not pissed at the people in both parties running this show, you're not paying attention.
Posted by reality-based educator at 12:33 AM