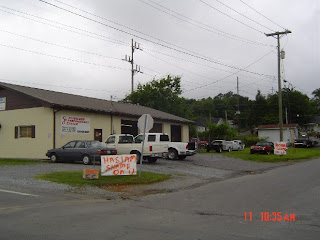 A Cleveland, Tenn., businessman says city officials crossed a line when they tore down protest signs he posted outside his business Thursday during a visit by Gov. Bill Haslam.

"There needs to be a public apology," said Dan Rawls, owner of Cleveland Performance Center, for what he says is trespass and violation of his right to free speech. "I think they need to take a course in the Constitution to learn not only that you can't violate private property rights, you can't violate First Amendment rights."

But City Councilman George Poe said Rawls is the one who crossed the line by planting the handmade signs on city right of way near the South Cleveland Community Center, where Haslam announced $570,000 in grants for the center and the Mouse Creek greenway.

"The governor came to give us a half-million dollars, and I thought that was pretty nice," Poe said Friday. "We come out the door, and there's signs all over the place painted on cardboard boxes in orange spray paint. ... It was a pretty big embarrassment to us in the city," Poe said Friday.

Rawls planted signs in the grass near the street in front of his business to protest Haslam's support for the Common Core standards. Most states, including Tennessee, have adopted the K-12 education guidelines that Rawls calls a "federally run school system." "Shame on you Haslam," one read. A smaller sign next to it said, "Stop CC."

Poe said he went with City Manager Janice Casteel when she said the signs were on the public right of way. He said she called the police codes enforcement officer and began pulling up the signs.

Then, Poe said, "This big muscled-up guy, screaming, yelling, slinging his arms around," came out of Rawls' business and ordered him and Casteel off his property. Poe said he "thought he was going to give Janice a shove," so he used the police radio he carries to call for help.

Rawls said he ordered Casteel and Poe to get off his property but didn't in any way threaten them. Police showed up in force, but calm was restored quickly.

From photos, it's hard to tell whether the signs are in the 6-foot city right of way. The signs were on the ground before the codes enforcement officer arrived, Poe and Rawls agreed.

Even if the signs were on the right of way, Rawls questioned where Casteel gets authority to enforce City code, which is a police function.

"I'm so tired of this kind of stuff. We seem to have one law here for average citizens and another law for politicians and police officers," Rawls said.

He brought up a 2009 incident when Poe unloaded a full clip from a .380-caliber automatic at a car carrying a suspected burglar in a neighborhood. Poe was cited for aggravated assault and reckless endangerment, but a Bradley County grand jury declined to indict him.

"If you're a city councilman, you're allowed to shoot at them. If it was me, I'd be in jail for that," Rawls said.


Because Governor Bill Haslam would just be too delicate a flower to pass by a couple of small handwritten signs that you can barely read that criticize him and the Common Core Federal Standards.

What a country we live in these days.

You have all of these rights - unless you try and exercise them, and then you have the right to shut up and be quiet or they'll arrest your ass.

This story is definitely emblematic of one thing:

We definitely do have one law here for average citizens and another law for politicians and police officers, as Ralws told the Times Free Press.
Posted by reality-based educator at 5:26 PM