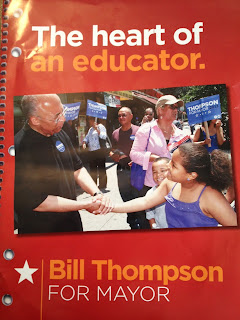 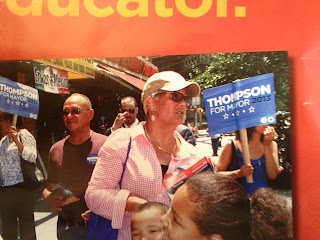 Now it's possible the guy in the ad is simply adjusting his sunglasses rather than giving the middle finger, but really, if you're the UFT and you're looking for a photograph to use for an Educators for Thompson ad (or whatever they're calling their front group for Thompson), is this the one you go with?

In an ironic twist, given what an awful comptroller Bill Thompson was, given the work he has done for the labor-busting Kurron Shares of America, given his hiring of teacher bashing Regents Chancellor Merryl Tisch to co-chair his campaign, given his stance that teachers shouldn't get the 4% raises every other city worker got back in 2009, given that crooked Al D'amato is one of his biggest supporters and Mayor Bloomberg steered $43 million to $51 million to Thompson's wife's museum at the very time he was running a lackluster campaign against Bloomberg for mayor, I think this ad photo expresses perfectly what the UFT has done to its rank and file membership by endorsing Bill Thompson for mayor.

More will follow for teachers if Bill Thompson wins his race to be mayor.
Posted by reality-based educator at 3:17 PM