Protesters at a rigged Panel for Educational Policy meeting are called a "disgrace" by Mayor Bloomberg for protesting his school closure policies.

Governors and legislatures around the country look to bar public employees, specifically teachers, from collectively bargaining or having any job protections.

The president calls for the firing of "bad teachers" during his State of the Union address and gets the biggest hand of applause in the whole speech for that line.

20% of the country own 85% of the wealth but pay half the taxes they paid under Reagan.

Mayor Bloomberg refuses to raise taxes on those wealthy people but doesn't mind closing 100 senior centers, 20+ firehouses, daycare centers and laying off 4,666 teachers and 1,500 other city employees. He said this is the only choice he has.

Governor Cuomo refuses to extend a millionaire's tax on people making over $200,000 a year that raises $1.2 billion a year in revenue, then cuts school budgets and Medicaid because the state is "broke." 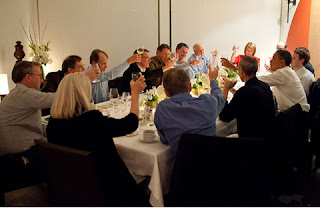 Welcome to the Machine.

Posted by reality-based educator at 8:31 PM