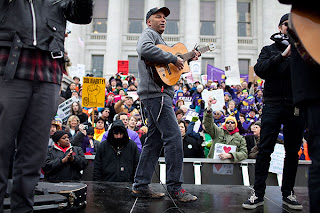 Rage Against The Machine guitarist Tom Morello spent Monday at the Wisconsin protests, performing acoustic songs at a rally and delivering a fiery speech to the thousands inside of the capital rotunda who are protesting Governor Walker’s attempt to end the right of state employees to collectively bargain. "What's happened so far might be the most inspiring 24 hours of my life as an activist," Morello tells Rolling Stone. "I've never seen this kind of outpouring of unapologetic, steel-backboned support for union causes in the United States. The Madison police were delivering bratwurst to the protesters inside the capitol, and the kids were thanking them. It was unbelievable."

At a freezing cold rally outside of the capital, Morello was joined by Rise Against frontman Tim Mcilrath, Wayne Kramer of the MC5 and Boston folk group Street Dogs. The show mixed classics like Neil Young's "Ohio," Bob Marley's "Get Up, Stand Up" and Morello's driving acoustic version of Rage Against the Machine's "Guerilla Radio." "No matter what Gov. Walker, the Mubarak of the Midwest, says, this land is your land," Morello said before singing Woody Guthrie's "This Land is Your Land." "Never give up and never give in!"

If Governor Walker’s bill passes, it would effectively destroy Wisconsin’s civil servant unions; many fear that other Republican-controlled states would attempt to follow suit. "I come from a coal-mining town in central Illinois where everybody was union," says Morello. "For almost 30 years, my mom was a public high school teacher in Libertyville, Illinois. I grew up with a firm belief that the leverage we have as working people is through the union. It's the only counterweight to the raw greed of corporate power. For the past 22 years, I've been a union man in L.A. as a member of the Professional Musicians Local 47."

After the rally, Morello entered the packed Capitol rotunda, which had been occupied for the past week, grabbed a bullhorn, and made one of the most rousing speeches of the day. "This is what they do in times of economic crisis," Morello said. "They think people aren't paying attention, that they can just sneak through this legislation that would rob us of decades, centuries of social progress. We didn't pick this fight. [Governor Walker] tapped us on the shoulder and said 'let's fight.' And now we're gonna knock his legislative teeth out."

Fred Klonsky has video at his blog.

Check it out - it's really, really good.

Man, it's so cool to see a "celebrity" and a musician come out and talk the talk of the union man and woman.

And he speaks this FROM HIS OWN experience, first with his mom as a teacher for 30 years, then as a member of Professional Musicians Local 47.

You hearing any of this, John Legend?

How about you, Sting?
Posted by reality-based educator at 8:00 PM