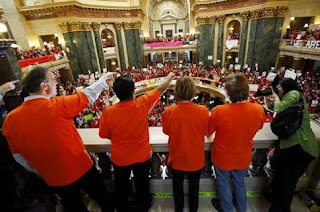 Union organizers, members and supporters seem to realize there can be no "collaboration" in Wisconsin - the corporate oligarchs are out for their destruction:

For four days, the protests against the Republican governor's proposal have grown and paralyzed parts of the state.

Many public schools were forced to close because so many teachers are taking part in the demonstrations.

The rebellious Wisconsin workers have been reinforced by union workers from other parts of the country, including New York.

They accuse Walker of using the state's fiscal troubles as an excuse to go after union workers. They say he is trying to balance the books on their backs while giving huge tax breaks to rich corporations.

And guess who is bankrolling the governor of Wisconsin:

The Wisconsin governor who sparked a massive uprising by going after public workers gobbled up big bucks from a Manhattan moneyman who got the Tea Party percolating.

David Koch, who lives in New York City, supplanted Mayor Bloomberg at the city's richest man on the Forbes 400 list of wealthiest Americans.

The Koch brothers, whose oil and gas empire is based in Wichita, Kan., were unmasked in a New Yorker piece last year as Tea Party bankrollers. They deny being in the movement.

Revelations of the Koch Brothers' involvement in Walker's rise to power came as thousands of angry civil servants chanting "Kill the bill" invaded the Wisconsin state capitol to derail what they're calling a Republican-led drive to bust their unions.

At the same time, a furious Walker dispatched state troopers to round up the 14 Democratic state senators who fled from Madison a day earlier - denying the GOP majority a quorum need to vote on a bill that would end union workers' long-held collective bargaining rights.

"This is the ultimate showdown," said State Sen. Scott Fitzgerald, a Republican.

Obama has showed half-hearted support for public employees but he's pretty much sat on his hands during this fight.

And why wouldn't he do just that?

He is in the middle of his own assault on federal workers and teachers all across this country.

Do NOT forget that while the Tea Party crazies and the Republican Party are promoting these virulent anti-union/anti-worker policies, corporate whore Democrats like Obama and Andrew Cuomo, themselves bankrolled by corporate interests and Wall Street (do NOT forget that Barack Obama's biggest 2008 campaign donor was Goldman Sachs) are engaged in their own assault on unions and public employees.

It may not be as virulent and destructive as the assaults launched by the Repubs.

But we MUST remember who has helped in this fight in Wisconsin and who hasn't.

And then we can reward the pols who have helped in this fight in 2012 and punish the ones who haven't.
Posted by reality-based educator at 4:31 PM