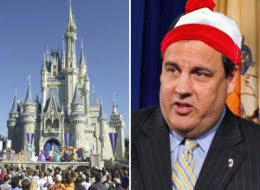 Raising health care costs on public employees by 22%, slashing Medicaid, refusing to fund the pension plan unless the unions agree to sharp cuts in benefits and hikes in retirement ages - and he was swaggering and bragging as he announced all of this, according to the NY Times:

TRENTON — A pugnacious and boastful Gov. Chris Christie proposed a no-growth budget for New Jersey on Tuesday, saying he had inspired a legion of copycat governors from Albany to Sacramento and was not about to let up in his efforts to shift money from public workers to property-tax payers and businesses that create jobs.

Declaring that his deep cuts last year had “established the new normal,” Mr. Christie, a Republican, carved out a modest increase for public-school aid, kept municipal aid flat, offered small increases for indigent care at hospitals and financial aid for college students, and set aside a bigger amount to support improvements in the state’s vital transportation system.

But to pay for his priorities, Mr. Christie, who has waged a 14-month rhetorical war against the teachers’ and other public-sector unions, stepped up the pressure to slash their members’ health and retirement benefits.

The governor conditioned a doubling of the middle-class property tax rebate, for example, on the passage of changes that would make public employees pay 30 percent of the cost of their health insurance, compared with an average of 8 percent that Mr. Christie said many now pay.

He also offered to make a partial payment to the state’s woefully underfunded pension system, but only if the system was overhauled to require bigger payments from workers, smaller payouts and an increase in the retirement age.

“Please, let’s not pick the special interests over our overburdened taxpayers,” Mr. Christie said during his budget address.

Mr. Christie said that even in Wisconsin, where Gov. Scott Walker’s proposal to cut the benefits and collective bargaining rights of public workers had set off a firestorm of protests, officials “have decided there can no longer be two classes of citizens: one that receives rich health and pension benefits, and all the rest who are left to pay for them.”

Meanwhile the Times points out that post crisis, austerity measures seem very sexy, but they are actually harmful.

But you know, when you're talking about raising taxes on hedge fund managers, there can never be enough political courage in the form of austerity measures to lay off workers, squeeze their wages and slash their benefits.