Come Out, Come Out, Wherever You Are! 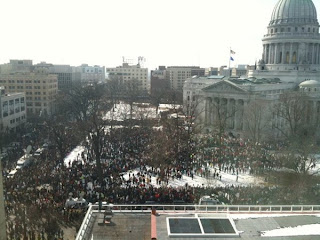 That was the chant that echoed outside Governor Scott Walker's office as a huge crowd protested the destruction of unions and public employees in the state of Wisconsin:

MADISON, Wis. — As four game wardens awkwardly stood guard, protesters, scores deep, crushed into a corridor leading to the governor’s office here on Wednesday to protest some of the most far-reaching budget cutback proposals in the nation. Screams of “Come out, come out, wherever you are!" echoed throughout the Capitol building.

Behind closed doors, Scott Walker, the Republican who has been Wisconsin’s governor for about six weeks, calmly described his intent to forge ahead with plans to cut benefits to public workers and to sharply curtail collective bargaining rights in the state. Yes, some angry workers had surrounded his state car on Tuesday and started pounding on it. And yes, others had surrounded his home in Wauwatosa. But Mr. Walker said he had no other options.

“I’m trying to balance a budget,” he said.


Events in Wisconsin this week, though, are a sign of something new: No more apologies, no half-measures, no more limping by until revenues return next year. Given the dire straits of states around the country, Mr. Walker is likely to joined by other state leaders who are forced to take similarly dramatic steps, particularly on matters of state workers, pension and unions.

With both chambers of the State Legislature dominated by Republicans after November’s election, Mr. Walker’s notion had largely drawn praise from those controlling the Legislature. Votes were expected later this week. Mr. Walker has said that he hopes to get the plan approved by next week, when he is expected to propose a new budget for the coming years that will include more sharp cuts.

Here, workers said they were frightened of what the cuts would mean for their family budgets, particularly for some workers who were already struggling. The changes call for them to pay 5.8 percent of their salary toward their pensions, much more than now, and at least 12.6 percent of their health care premiums, double their current contribution.

But workers also seemed worried about the broader, lasting impact of the proposed changes to the way public employee unions operate in the state.

Aside from police and firefighters, raises for workers would be limited to the consumer price index, unless the public agreed to a higher raise in a referendum. Most unions would have to hold annual elections to keep their organizations intact and would lose the ability to have union dues deducted from state paychecks — making it more difficult, some here say, for unions to survive.

Mr. Walker, who promised during the campaign to level the playing field of benefits for public workers and private workers, has said the state’s financial circumstances require the changes.

Over drinks at a bar on a dreary, snowy night in Washington this past month, a former Senate investigator laughed as he polished off his beer.

"Everything's fucked up, and nobody goes to jail," he said. "That's your whole story right there. Hell, you don't even have to write the rest of it. Just write that."

I put down my notebook. "Just that?"

"That's right," he said, signaling to the waitress for the check. "Everything's fucked up, and nobody goes to jail. You can end the piece right there."

Nobody goes to jail. This is the mantra of the financial-crisis era, one that saw virtually every major bank and financial company on Wall Street embroiled in obscene criminal scandals that impoverished millions and collectively destroyed hundreds of billions, in fact, trillions of dollars of the world's wealth — and nobody went to jail. Nobody, that is, except Bernie Madoff, a flamboyant and pathological celebrity con artist, whose victims happened to be other rich and famous people.

The rest of them, all of them, got off. Not a single executive who ran the companies that cooked up and cashed in on the phony financial boom — an industrywide scam that involved the mass sale of mismarked, fraudulent mortgage-backed securities — has ever been convicted. Their names by now are familiar to even the most casual Middle American news consumer: companies like AIG, Goldman Sachs, Lehman Brothers, JP Morgan Chase, Bank of America and Morgan Stanley. Most of these firms were directly involved in elaborate fraud and theft. Lehman Brothers hid billions in loans from its investors. Bank of America lied about billions in bonuses. Goldman Sachs failed to tell clients how it put together the born-to-lose toxic mortgage deals it was selling. What's more, many of these companies had corporate chieftains whose actions cost investors billions — from AIG derivatives chief Joe Cassano, who assured investors they would not lose even "one dollar" just months before his unit imploded, to the $263 million in compensation that former Lehman chief Dick "The Gorilla" Fuld conveniently failed to disclose. Yet not one of them has faced time behind bars.

The Wall Street and corporate criminals are stealing with impunity, public workers and unions are being scapegoated for the mess and until the Wall Street/corporate crooks and their political shills are SCARED that the American public is GOING TO DO SOMETHING TO HURT THEM, they are going to continue to do this.

It is time to make them fear.

Come out, come out, wherever you are.
Posted by reality-based educator at 7:17 PM