NYU Students Carry Most Debt Of Any Private College In Country 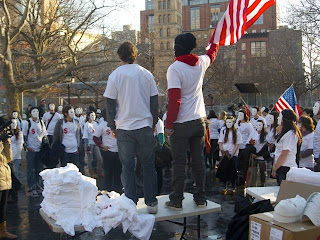 NYU students take to Washington Square to protest debt levels at the college:

NYU students have a lot of debt and they are sick of it, apparently. Earlier this afternoon a group of students raged (peacefully) against the machine in Washington Square Park, donning masks and t-shirts on which they had written how much they owe. The aim was to bring attention to the fact that NYU's students carry a cumulative $659 million in debt, the highest in the country for a non-profit college or university.

The majority of the peaceful demonstration revolved around those in attendance donning masks and shirts emblazoned with their debt while standing very, very still for a few moments. It was organized by NYU Local and MTV's Andrew Jenks.

The Local's EIC Charlie Eisenhood—who spoke in the park about the burdens of student debt without blaming anyone—had some high hopes. Before it he told the Washington Square News that "I'd like NYU to feel compelled to put out a statement both on their own policy on financial aid and maybe what we could do nationally. If anybody who could offer a solution, it should be NYU." We'll find out soon enough if NYU takes the bait.

Yeah, the brain trust at NYU was too busy buying up downtown real estate to respond to the protest.

They did, however, raise tuition and fees just a little bit to cover the higher real estate costs (the market's up these days, you know!)
Posted by reality-based educator at 11:57 AM