The New York Daily News has an astounding cover this morning of Travyon Martin and the names of black men murdered in this country: 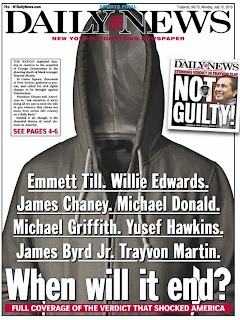 That Daily News cover, while seemingly extraordinary, is just another piece of corporatist propaganda.

Note the names that are not on that cover - black men shot and killed by the NYPD:


Someone else noted that a more comprehensive list of black men shot and killed by the NYPD could be put together, but it would be too long for Twitter.

How true that is.

And how true that the propaganda rag that is the Daily News wants you to believe they're on the Justice For Trayvon Martin bandwagon while they conveniently ignore all the Trayvon Martin's murdered here in New York City by the NYPD because linking those murders with Trayvon's doesn't fit into their ideological worldview.
Posted by reality-based educator at 10:29 AM