Are Americans Waking Up From Their Self-Induced Comas?

Washington Post polls finds many Americans no longer believe in the fantasy of the "American Dream:

Four years into an economic recovery in which most of the benefits have flowed to the top earners, a majority believe that the American Dream is becoming markedly more elusive, according to the results of a Washington Post-Miller Center Poll exploring Americans’ changing definition of success and their confidence in the country’s future.

Although most Americans still think hard work and education breed opportunity, their faith in a brighter tomorrow has been eroded by intensifying struggles on the job and at home that have led some to conclude that the United States has emerged from the Great Recession a fundamentally changed nation.

Among the poll’s findings:


●It’s increasingly difficult to make ends meet. Almost two-thirds of people express concerns about covering their family’s basic living expenses, compared with less than half the public four decades ago. One in three say their money worries are with them all or most of the time, and the number who say they worry “all the time” about paying the bills has doubled.

●In the workplace, most people think they are running in place. More than half doubt they will get a raise or will find a better-paying job in the next five years. As it is, 58 percent say they earn less than they deserve. Half of those polled say they have taken training in the past 12 months to maintain or improve their skills, but among that group, 72 percent say it hasn’t made much difference in their paychecks.

●Fear of being thrown out of work is greater than it has been in polls taken since the 1970s. More than six in 10 workers worry they will lose their jobs because of the economy. Today’s worries exceed those in 1975, at the tail end of a harsh recession marked by high unemployment and high inflation. Less than half of Americans expect to move up in their economic class over the next few years. Slightly more predict they will stay in place — or slip down a rung.

●As they struggle to keep up, a majority of people question a basic precept of the American Dream: that the next generation will enjoy a higher standard of living. While slightly more than half of respondents, 54 percent, say their standard of living is better than that of their parents, just 39 percent believe their children will have a better life than they have.


There seems to be some level of awareness that they're getting screwed - but not enough.

Take a look at the findings around what it takes to get ahead: 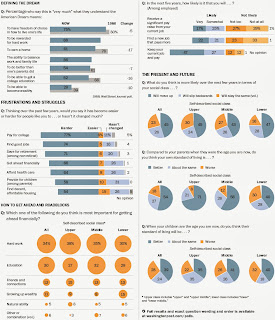 People are fools if they think "hard work" and "education" get you ahead these days.

Wealth and connections get you ahead, not hard work and education.

Yes, there are always exceptions to the rule which keep the whole system from exploding, but for the most part, there is little upward mobility in this country - you will die either in the class you were born into or the one below that.

Until people get their heads around the essential truths - they have been lied to since childhood about this American Dream crap, they've been lied to about this "democracy" stuff, we live in an oligarchy ruled by plutocrats - nothing is going to change here.

One commenter puts the problem into perspective


Thanks to the 1% and their ownership of the House of Horrors Representatives the American Dream has become the American Nightmare...

The American Labor Movement has been crushed and the "robber barons" are raping the 99%...

Time for an American Spring...

But most Americans are too stupid, and too foolish to realize this.

So in the end, I think nothing much changes.

Now go back to sleep and watch your football...
Posted by reality-based educator at 8:30 AM