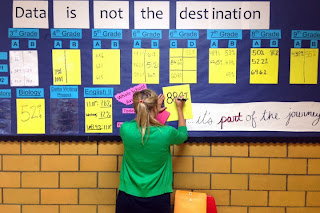 The above photo and text appeared with a NY Post editorial touting the wonders of Teach For America teachers over traditional public school teachers.

I want you to take a very close look at the photo.

The bulletin board says "Data is not the destination, it's part of the journey."

Between those words at the top and bottom of the bulletin board, the TFA teacher is updating her students daily data on Daily Data Wall.

I want you to think about the kind of classroom this woman runs, where daily data is tracked on every student and put up on a wall outside the classroom.

She must focus an awful lot on the kinds of things that can be quantified and tracked.

But what about the lessons in life that children need to learn that cannot be simplified and quantified, cannot be tracked, cannot be updated on the Daily Data Wall?

And how about the slogan "Data is not the destination, it's part of the journey"?

Can that slogan be true when data is tracked on every student every day and put up publicly on a wall outside the classroom?

Doesn't this so Daily Data Wall send the message to students that they are their data?

Someday in the future, when the current crop of meritocrats and sociopaths running the country in positions of power in politics, business, public education and non-profits are graveyard data themselves, people are going to say "Did those people in the 21st century really believe that everything that mattered in life can be quantified and tracked?  Did they really believe the data they tracked and used to make decisions - from the BLS jobs report to the inflation numbers to the value added's on teachers - was accurate and gave them enough information to make good and wise decisions?"

This fetishization of data will end when people begin to realize data-driven decisions are only as good as the data itself and more often than not in our world, data is manipulated, simplified, erroneous, or essentially useless because it doesn't give the whole picture.
Posted by reality-based educator at 11:00 AM