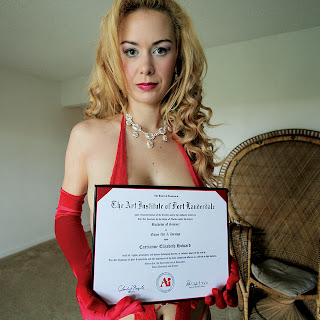 Raging Horse does an excellent job of pointing out who NBC should have invited for their corporate education reform-slanted Education Nation propaganda-fest this year.

Alas, NBC isn't much interested in having anybody on that stage who won't carry water for the corporate education reform agenda, so they only invited deformers like Michael Bloomberg, Jeb Bush, Joel Klein, Michelle Rhee, et al. to this year's Education Nation.

Even Diane Ravitch was only invited to sit in the audience, an outrageous insult to not only Ravitch but to every teacher in this country who has been slammed and smeared by corporate reforms like Klein, Rhee, et al.

But of all the corporate education reform-friendly guests NBC did invite, I find Goldman Sachs CEO Lloyd Blankfein the most outrageous.

You see, Goldman Sachs, in addition to being the most evil corporate entity on the planet, owns 41% of the parent company of the notorious for-profit swindle college, the Art Institutes.

They use the story of Carrianne Howard, a young woman who graduated from the Art Institute of Fort Lauderdale and now makes her living as a stripper, to show just what a scam the school is (that's Howard pictured above, with her Art Institute diploma):

Carrianne Howard dreamed of designing video games, so she enrolled in a program at the Art Institute of Fort Lauderdale, a for-profit college part-owned by Goldman Sachs Group Inc. Her bachelor’s degree in game art and design cost $70,000 in tuition and fees. After she graduated in December 2007, she found a job that paid $12 an hour recruiting employees for video game companies. She lost that job a year later when her department was shuttered.

These days, Howard, 26, makes her living in a way that doesn’t require a college diploma: by stripping at the Lido Cabaret, a topless club in Cocoa Beach, Florida. “I didn’t know what else to do,” she says. “I’ve got a worthless degree. It’s like I didn’t attend school at all.”

Carrianne Howard, the Florida student, didn’t borrow for her education. Instead her parents paid roughly $70,000 in tuition bills. Her mother, an airline data analyst, and her father, a computer engineer, sold their California home and moved to Virginia after her father lost his job and her mother retired. They used money from the sale to pay for tuition, and her parents are now struggling financially, Howard and her mother say.

Howard grew up in Valencia, California, a suburb of Los Angeles, and became drawn to video gaming during high school. One afternoon in 2004, an Art Institute ad popped up on her PC.

She and her mother toured the Fort Lauderdale campus, a bright, modern three-story building flanked by reflecting pools and palm trees. Her tour guide “just made it sound really exciting and a lot of fun, like I was going to make hundreds of thousands of dollars,” Howard says.

A couple of years into her studies, Howard says she grew disenchanted. Some classes consisted largely of playing video games, she says. She wanted to drop out but her mother insisted she finish because the family had spent so much already. She graduated in December 2007; in March 2009 she lost her first job, at GameRecruiter, a Fort Lauderdale-based gaming industry employment agency where she was making $12 an hour. Marc Mencher, GameRecruiter’s president and CEO, says she was let go only because he closed down her entire department, and calls her “an exceptional performer.”

She may be struggling to find work in part because of inadequate preparation from the Art Institute’s gaming department, Mencher says.

“It’s a weak program because it’s understaffed,” says Mencher, who serves on the Art Institute’s national advisory board for gaming programs. “I personally feel the students aren’t getting their money’s worth.”

After Bloomberg Businessweek asked EDMC for comment, Mencher sent a follow-up e-mail, saying that although the Art Institute is “not perfect and they have issues like any organization,” it is “an excellent program built on input from respected industry professionals along with local employers.” It has an “outstanding placement” record for graduates, he said.
Lido Cabaret

Howard applied for dozens of jobs, not only in gaming but also in grocery stores and nursing homes, mostly for minimum wage, she says. In October 2009, Howard turned to adult entertainment by doing paid Web chats. In March she started dancing at Lido Cabaret, earning $400 to $1,000 a week, she says.

She now hopes to save enough to go back to college and get a business degree. As she considers returning to school, Howard also helps run an anti-Art Institute website, where she has collected more than 70 names in a petition to send to the U.S. Education Dept.

The private, nonprofit Florida Institute of Technology, where Howard would like to enroll, won’t accept any of her credits from EDMC, according to spokeswoman Karen Rhine, because the Art Institute doesn’t have the kind of accreditation the traditional college requires. In its school catalog and other documents, the Art Institute “does not imply or guarantee” that credits will transfer to other universities, says EDMC’s Muller.

At 1 a.m. on a recent weeknight, Howard finished a shift at Lido. “This is what I do,” she says. “When I’m in here, I try not to think about the Art Institute.”


NBC ought to add Carrianne Howard or any of the other students who graduated from Art Institutes with a worthless degree and tens of thousands in debt to talk up the school.

But instead they invite banker criminal Blankfein instead.

In the past, they have had the CEO and head criminal of the University of Phoenix at Education Nation.

This year, the executive VP from Apollo Group, the owner of the University of Phoenix, will be there.

So every year, NBC doesn't miss a trick to not only invite every corporate deformer they can think of to sell the corporate deform agenda, but there's always a for-profit college criminal shill on the panel as well.

But no Diane Ravitch, no Anthony Cody, no Karen Lewis, no Susan Ohanian, no Lois Weiner, no actual working teachers who don't carry the ed deform message

And no students from one of these for-profit scam schools like Art Institutes or University of Phoenix to tell the audience how much debt they carry as they work at Starbucks or Applebees or, like Carrianne Howard, a strip club.

NBC's Education Nation ought to come with a scammer alert on the bottom of the screen.

The entire "symposium" is nothing but propaganda for the corporate education deform movement and for the criminal for-profit school industry.
Posted by reality-based educator at 3:07 PM