I can't believe they're declaring it an open school day before the snow even starts:


NEW YORK (WABC) -- The Department of Education announced that New York City Schools will be open Thursday. With the storm expecting to hit overnight, crews are already preparing roads in Manhattan.

He will keep schools open like he did during the last big snow storm.


Meanwhile, Lee Goldberg at WABC just announced he is upping snow totals to 10 inches for the city.

Why would Farina announce schools are opened tomorrow so early tonight before the storm hits, even as both Nick Gregory of FOX and Lee Goldberg of WABC are talking about raising their snow totals for tomorrow?

Makes no sense to me.

We'll see what stuff looks like in the morning, but they may come back to regret calling tomorrow an open school day this early. 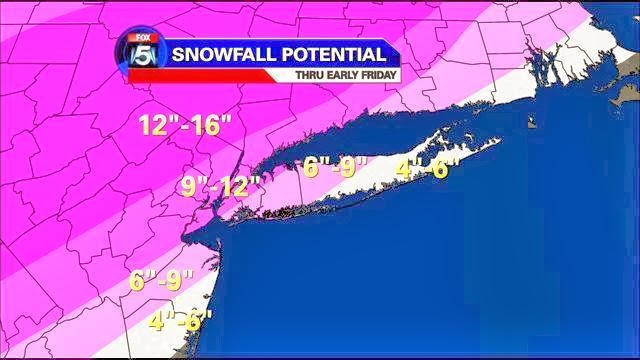 This could turn out very badly for Mayor de Blasio and Chancellor Farina.

With the storm not hitting until after midnight and with the heaviest snows expected right before and perhaps during the morning rush hour, they should have waited until 4 AM to make the call on whether schools were opened or not.

I'm heading off to bed now, and maybe when I wake up in the morning, Farina will be right and all will be swell for the morning commute.

But I've been watching the forecasts and models pretty closely, and unless Farina and de Blasio know something I don't know, there's a lot of uncertainty about the storm that has the locals mets upping their totals just as the storm is hitting that makes me think this early an open school call is foolish.
Posted by reality-based educator at 11:03 PM

Email ThisBlogThis!Share to TwitterShare to FacebookShare to Pinterest
Labels: snowjob