NY Post: Farina Says No Excuse For Students Who Took A Snow Day

Here's the latest, as reported by the NY Post:

Farina also callously declared that students who were absent from school Thursday would not be given a pass for taking the day off.

“At the course of a whole day, you can still get to school,” she said.


The Daily News reports that only 45% of NYC school children showed up to school today, so that's an awful lot of unexcused absences Chancellor Farina will be tallying up.

I was too busy teaching the handful of students who showed up to my classes today a rigorous Common Core-based lesson to watch the De Blasio/Farina presser, but I have to say that's the kind of statement that pisses parents off and solidifies the meme that the person who made the statement is clueless (as the Post put it.)

Especially when the same person earlier said “It’s absolutely a beautiful day out there..." as it was sleeting and raining on top of the 9-10 inches of snow that had fallen.

BTW, the chancellor's town hall meeting that was to be held in Brownsville tonight was canceled “due to inclement weather.”

Not so beautiful a day that the town hall meeting could go on.

The problem for Farina here is that she not only made a very poor decision to call school at 10:30 the night before the storm even started, but she has defended that decision with absolutely tone deaf statements that have helped make her one of the newest Internet memes. 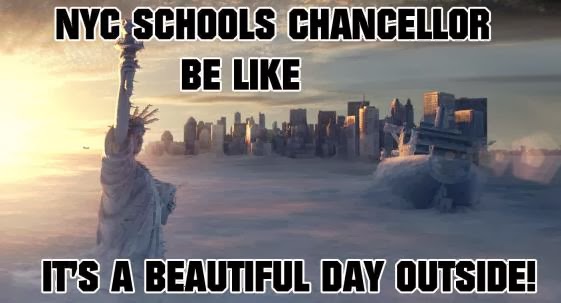 She's not helping herself by stating that students who took the day off will not be given a pass because “At the course of a whole day, you can still get to school."

In fact, De Blasio and Farina both spent a lot of political capital today defending a poor decision.

De Blasio had no problem apologizing to the entire UES over a manufactured snow outrage last month.

But for some reason, neither he nor his chancellor will acknowledge the poor decision they made here or stop compounding it by saying stupid stuff to defend it.
Posted by reality-based educator at 7:23 PM