His death was announced today - he was 91.

His influence was long-lasting:

Television comedy in its early days was dominated by boisterous veterans of vaudeville and radio who specialized in broad slapstick and snappy one-liners. Mr. Caesar introduced a different kind of humor to the small screen, at once more intimate and more absurd, based less on jokes or pratfalls than on characters and situations. It left an indelible mark on American comedy.

“If you want to find the ur-texts of ‘The Producers’ and ‘Blazing Saddles,’ of ‘Sleeper’ and ‘Annie Hall,’ of ‘All in the Family’ and ‘M*A*S*H’ and ‘Saturday Night Live,’ “ Frank Rich wrote in The New York Times when he was its chief theater critic, “check out the old kinescopes of Sid Caesar.”

A list of Mr. Caesar’s writers over the years reads like a comedy all-star team. Mel Brooks (who in 1982 called him “the funniest man America has produced to date”) did some of his earliest writing for him, as did Woody Allen. So did the most successful playwright in the history of the American stage, Neil Simon. Carl Reiner created one landmark sitcom, “The Dick Van Dyke Show”; Larry Gelbart was the principal creative force behind another, “M*A*S*H.” Mel Tolkin wrote numerous scripts for “All in the Family.” The authors of the two longest-running Broadway musicals of the 1960s, Joseph Stein (“Fiddler on the Roof”) and Michael Stewart (“Hello, Dolly!”), were Caesar alumni as well.

Sketches on “Your Show of Shows” and its successor, “Caesar’s Hour” (1954-57), were as likely to skewer the minutiae of domestic life as to lampoon classic Hollywood movies, arty foreign films and even operas. Mr. Caesar won Emmys for both those shows.

Sid was an alcoholic and an addict who found health:

Incapacitated by his addictions and neuroses, barely able to get out of bed, he underwent intensive psychotherapy and medical treatment. He found salvation and sanity, he later said, in a form of Jungian self-therapy: recording improvised dialogues each day between himself as Sid, a wise father, and Sidney, his wayward son, whom the father teaches to become a restrained, confident adult. In the 1980s, Mr. Caesar acquired a new addiction: healthful living. He developed a lean, youthful physique by avoiding fat, salt and sugar and by strenuously working out at least one hour each morning.

“Now, instead of knocking life down, tearing it apart, I graciously accept life,” he said.


I'm a little young for the first run Caesar shows, but certainly have seen much of the work of his "all-star comedy team" - Mel Brooks, Carl Reiner, Woody Allen, Larry Gelbart, Neil Simon and Mel Tolkin.

And of course you can't mention either Sid Caesar or Your Show of Shows without mentioning Imogene Coca.

Here is a great photo - the way I choose to remember Sid: 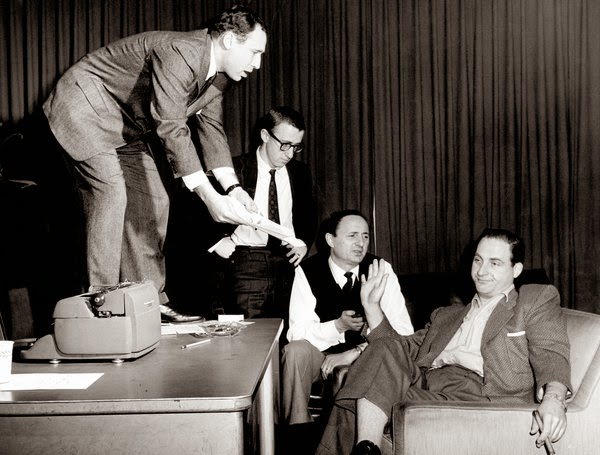 And finally, some excellent advice from Sid:


In a 1987 interview with The New York Times, Mr. Caesar looked back on his early success and subsequent failures, both of which he admitted he had been unprepared to handle, and reflected on the perspective he said he had finally achieved.


Rest in Peace, Sid.
Posted by reality-based educator at 9:58 PM