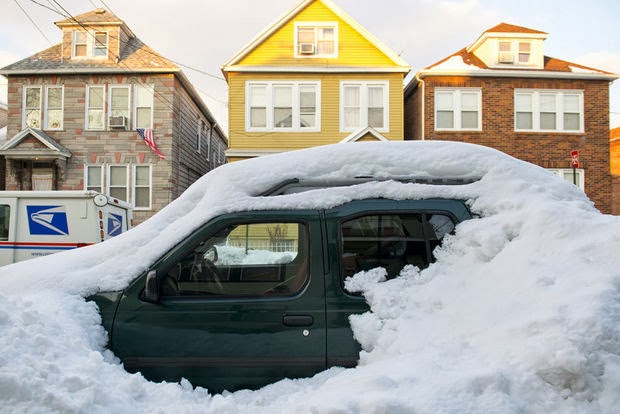 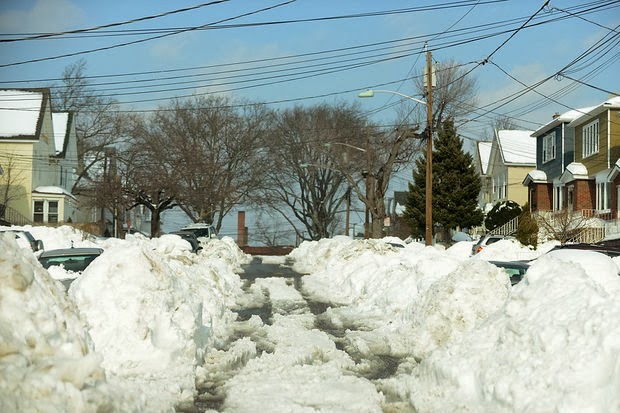 The City is working to remove snow from corners and has implemented a snow removal plan to haul snow to vacant lots owned by the City, State and County. Today, with the snow from last night and the freezing temperatures, icy road conditions persist. Because of the regional salt shortage, Jersey City has implemented additional measures to supplement including the use of liquid brine and sand but is asking residents to please stay off the roads unless absolutely necessary and to seek alternative means of transportation.


One alternative mode of public transportation - the PATH train that runs from Newark to World Trade Center - is unavailable to Jersey City residents looking to get the hell out of Fulop's snow and ice-clogged Jersey City because the Port Authority has shut it down every weekend for the rest of the year:

Much to the chagrin of residents, PATH weekend closure of the World Trade Center (WTC) and Exchange Place stations is set to begin tonight, Friday Feb. 14 and weekend closures for these stations will continue most weekends (Friday nights through early Monday mornings) throughout 2014 with the exception of major holidays.

Mayor Steven Fulop ran for office last year on a reformer campaign platform to rid Jersey City of the corruption and cronyism of the former mayor, Jerramiah Healy (who just narrowly missed indictment when a whole bunch of politicians were arrested for corruption in 2009 - including the Hoboken mayor and the deputy mayor of Jersey City.)

Alas, Jersey City's issuing desperate pleas for residents to "stay off the roads unless absolutely necessary" a day after a few inches of snow fell and to "seek alternative means of transportation" when at least one of those alternative means - the PATH train from Newark to World Trade Center - is shut down makes me think Steven Fulop is in over his head as mayor of this city.

Some of the commenters on the Jersey City Facebook page echo that sentiment:

The roads are TERRIBLE out there, especially Summit ave through the heights. Be careful, everyone.

Drivers traveling on Westside Avenue and turning onto Woodlawn Avenue please slow down. Icy conditions on corners. We have seen several cars skid off the road.

How about clearing side streets!

All side streets in Harsimus Cove area are treacherous!! Please come up with a plan...there is more snow coming tomorrow overnight. There is little to no parking in an already congested area, and people can't get around.

Downtown needs salt, whatever, at all intersection BAD BAD ICE 3 crashes in less an hour.

Alternative means of transportation? Like the PATH train? Oh, right...it's not running to WTC over the weekend.

We need side street snow removal! No parking causing people to park crazy! Ice every where let's find away to hire some people give them shovels and let them remove side street snow something like clean up project men and women will work! Quick grant or something this will help a lot

Horrible conditions in Jersey City. The crosswalks are impassible!

The whole city is bad not just downtown the heights, every area of the City of Jersey City is bad. Cars, trucks n buses are getting stuck n accidents are everywhere. If they say stay off the roads, that dont mean drive. Be careful n please listen Stay Off The Roads.

Didn't do a Gd job yall suck it's so sad that a lot of people sipping n falling because yall not doing yall job or doing a half job if yall don't want ur job give it to someone that really need it.

If this is the best that we get from our local government. .then we are in big trouble. PS some of us have no choice..we have to work because of our profession...

I just had no choice and drive someone to dialysis.. If you don' t need to go out don't the roads are solid ice. There was just a four car accident on Marin Blvd and Grand Street.

We need something done! People work so we take public transportation But that is slow, and they can't even get around correctly Plus cars are parked in the way of real snow removal Soo again hire people pay volunteers whatever you have to do so we can get around the City.

I agree with many of the above posters. ALL of Jersey City is bad with all the snow and ice. To top it off, people are not shoveling (for whatever reason). My husband works nights, he isn't driving the car because the roads are terrible. Waiting for the bus has become a joke because they are WAY behind schedule due to the road conditions...IMO, despite there being a salt shortage, I believe that there was not enough salt purchased to begin with. In all my years of living here (my entire life), I don't recall JC ever having a salt shortage of this magnitude. Also, I've seen previous administrations work out plans to have the enormous piles of snow hauled away sections at a time. Nothing done so far with the 20 plus inches of snow. It looks at though JC is located somewhere in the Arctic somewhere. Can we please have some real answers about what is going on???

The crackheads in jsq run this city better


Jersey Journal columnist Augustin Torres has more on the Fulop response (or perhaps I should say, lack of it):

It snowed this week and not everyone is happy with the cleanup. Elected leaders receive report cards from their constituents based on residents' perception of what role their leaders' took on their behalf. Fair or not, in Jersey City Mayor Steve Fulop's case, it's starting to look like he needs remedial work.

Remember when Superstorm Sandy hit, Hoboken Mayor Dawn Zimmer made sure she was on TV talking to members of the National Guard, consoling residents or she was on social media telling everyone what she was doing and how they could get help. It didn't hurt to have Gov. Chris Christie visiting.

Despite a TV news shot of Fulop removing his jacket and picking up a shovelful of snow "like a Marine," I received about a half-dozen calls from folks who want to publish angry letters about Jersey City's snow job. Everyone tells me what they plan to write and I have to remind some that this is considered a family newspaper.

Most people are aware that the city ran out of road salt. The salt situation was so problematic that during this week's nor'™easter, when one Jersey City Improvement Authority official asked the county government to borrow some salt, he was rebuffed like he'™d asked for something not on the dinner table, say county sources. No one has road salt, in fact, and the county approved an emergency appropriation of $204,000, if they can find some, having already spent about $300,000 on rock salt. There's a sneaking suspicion in my mind that the rock salt suppliers are taking a page out of the OPEC nations' playbook.

Essentially, they say there are mountains of snow and ice on curbsides making it difficult to move about in the neighborhood without falling or getting wet. Every block has its own frozen parallel mountain ranges with their own small lakes at intersections. Nothing is going down the catch basins, several people pointed out. "Years ago, the city would pay people about $10 each, per catch basin, to clear them of snow and debris," said one Greenville old-timer.

Snow removal is an expensive proposition. It could cost about $250,000 a day to have a private vendor help with the work, and it could take a day just for clearing out a block or two. With this much snow, there are not many places that can handle the snow load. City Councilman Richard Boggiano suggests just dumping it in the Hudson River, despite legal bans, because of the extraordinary amounts. I'm sure New York City doesn't do it

I tried calling and texting the mayor to get a response but to no avail. The snow mountains must be blocking my signal.


One of the commenters at the JC Facebook page says Fulop is on vacation on the Vail ski slopes and can't be reached for comment.

I cannot confirm or deny whether Fulop is in town this weekend.

But I can say that if he is on the Vail ski slopes, he could have saved money on the air flight and ski lift fees and spent the weekend skiing down Grand Street right here in Jersey City.
Posted by reality-based educator at 1:40 PM