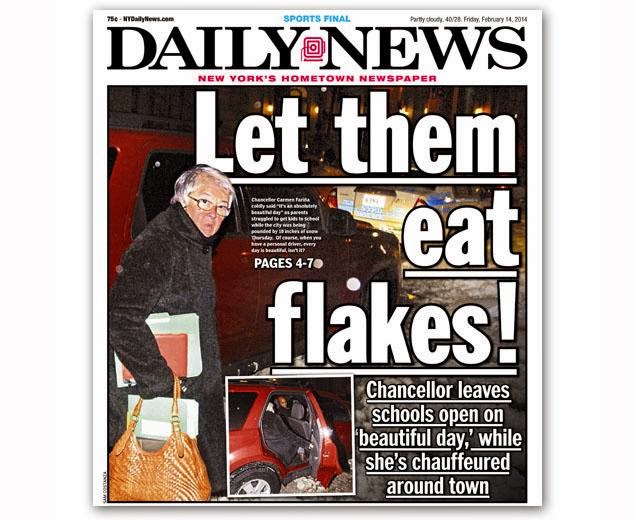 I bet Carmen Farina's wishing she stayed retired right about now- here's how the Daily News framed yesterday's "It's A Beautiful Day!" debacle:

The clueless chancellor added insult to inclement weather with that head-scratching remark at a news conference Thursday. She and Mayor de Blasio were defending the decision to keep schools open as a snowstorm bombarded the five boroughs.

They tried to fend off criticism that came from everyone from elected officials to students to weatherman Al Roker.

“Unlike some cities, we don’t shut down in the face of adversity,” said de Blasio, noting that New York City schools have been shuttered only 11 times since 1978. “I’m going to make decisions based on the information we have.”

Within minutes of wrapping up the press event, Fariña bailed out of the city’s storm center at the Office of Emergency Management. A short time later, Fariña’s office announced that her town hall meeting in Brownsville, Brooklyn, was canceled “due to inclement weather.”

The Daily News spotted her leaving her office Thursday evening, climbing into her taxpayer-funded red Ford Escape SUV after her full-time driver waited about an hour for her.

Fariña, whose husband resides full-time in sunny Florida, had nothing to say outside of Tweed on Chambers St.


I'll defend her taking her SUV - that's one of the perks of working in a mayoral administration and I don't remember the Daily News getting too mad about Bloomberg having two idling SUV's waiting for him wherever he went.

What I won't defend is the foolish decision she made the night before the storm hit, a decision she and her boss, Mayor de Blasio, refused to revisit in the morning as reliable meteorologists like Craig Allen warned of snow bands dropping 2-3 inches of snow an hour heading our way right through the morning rush or the tone deaf and idiotic statements she made both before the storm and afterwards when she needed to defend the decision.

I will point out one more thing about our intrepid chancellor.

Back when she was Klein's deputy and the DOE had decided to impose a standardized curriculum on many schools, Tweed had this fetish over measuring bulletin boards so that every one was standardized around the city and making sure every classroom had a reading rug.

There were rumors that educrats used to go around the city with rulers to measure the bulletin boards and punish teachers whose boards did not measure up to the standard.

The rumor was the bulletin board measuring fetish emanated from Carmen Farina's office, that she was the Tweedie who wanted the standardized bulletin boards and reading rugs in every classroom.

When de Blasio named Farina chancellor, I thought about the bulletin board measuring/reading rug fetish thing and hoped that the lack of judgment that episode showed was due to someone else in the Tweed braintrust, not Farina.

Can't say one way or the other whether the reading rug/bulletin board stuff was Farina's imposition, but I can say with certainty that she showed just that kind of bad judgment the last two days with both the snow call and then the defense of it.

I hope this does not indicate the future direction she will take at Tweed.

We have had many a year with education leaders making bad decisions and defending them to the end no matter what - we don't need another chancellor like that.
Posted by reality-based educator at 10:00 AM