I posted yesterday about the Times story that said Thompson was having trouble with some black voters because of his nearly incoherent stop-and-frisk policy stance.

Today's Quinnipiac poll captures that trouble in a colorful graph (via Azi Paybarah): 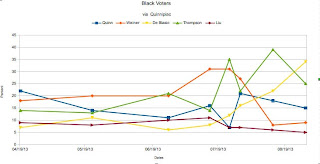 The Times story reported that the de Blasio ad with his son, Dante, was resonating with some black voters.

Dunno if the ad is the reason, but take a look at the trajectory for de Blasio with black voters.

Again, this is one poll (one that some people trust very little.)

And those Thompson numbers jump around a lot - there is quite a bit of volatility there.

The Marist poll has shown momentum for de Blasio too - but nowhere near as much as Quinnipac.

And the last Siena/Times poll still had Quinn in the lead with Thompson and de Blasio trailing her by 9 and 11 points.

Also, Thompson's campaign is disputing the Q poll numbers, saying they have an internal poll showing Thompson and de Blasio tied at 24 and Quinn in third, 7 points behind them.

When challenged to release the poll, the Thompson campaign changed the subject to Obama and '07.

Not sure what that has to do with Thompson and 2013.

The CW has been that Thompson will garner substantial support from black voters on Primary Day, that his black voter support is being underpolled by the public pollsters (as happened in 2009 when he outperformed on Election Day with black voters.)

The Quinnipiac poll suggests that CW may no longer be operative in 2013.

First Weiner was cutting into his support, now de Blasio and his "Go with the Fro!" ad looks to be doing the same.

There's still a lot of time left until Primary Day.

But if the Quinnipiac poll is anywhere near accurate, Quinn is finished and Thompson has got some ground to make up with the demographic group that was supposed to be his core support.
Posted by reality-based educator at 3:55 PM