More Than 1,500 Parents, Students And Teachers Rally Against John King And His Common Core Tests In Port Jefferson 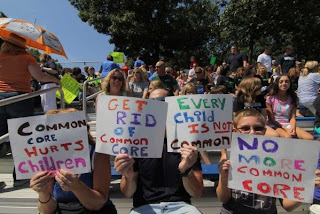 The pushback against the Common Core tests promoted by the NYSED and the Regents started in earnest yesterday in Port Jefferson, where more than 1,500 gathered to let NYSED Commissioner John King and Regents Chancellor Merryl Tisch know that children are more than tests scores, that they know the state purposely rigged the tests so that scores would plummet, and that the Common Core standards are harmful to children, especially younger ones.

One of the signs held at the rally that really struck a cord with me read "I should be blowing bubbles, not filling them in."

The harm that Common Core is doing to younger children is already being documented.

Back in January I wrote a post called "How Is Common Core For Kindergartners Not Child Abuse?," a piece which I want to repost here in full.

As the opposition to Common Core has grown, Common Core proponents are going with the propaganda line that all Common Core does is raise standards for children and what could ever be wrong with raising standards?

But take a look at how Common Core raises standards for kindergartners and you'll see just  how much is wrong with it:

How Is Common Core For Kindergartners Not Child Abuse?


The NY Post has a horrifying article about the new Common Core expectations for four and five year olds in NYC schools.


Kindergarten has come a long way, baby — too far, some say.

Way beyond the ABCs, crayons and building blocks, the city Department of Education now wants 4- and 5-year-olds to write “informative/explanatory reports” and demonstrate “algebraic thinking.”

Children who barely know how to write the alphabet or add 2 and 2 are expected to write topic sentences and use diagrams to illustrate math equations.

The city has adopted national standards called the Common Core, which dramatically raise the bar on what kids in grades K through 12 should know.

The jargon is new, too. Teachers rate each student’s performance as “novice,” “apprentice,” “practitioner” or “expert.”

Kindergartners are introduced to “informational texts” read aloud, such as “Garden Helpers,” a National Geographic tale about useful pests.

After three weeks, kids have to “write a book about what they’ve learned,” with a drawing and sentences explaining the topic.

The big test: “Miguel has two shelves. Miguel has six books . . . How many different ways can Miguel put books on the two shelves? Show and tell how you know.”

An “expert” would draw a diagram with a key, show all five combinations, write number sentences for each equation, and explain his or her conclusions using math terms, the DOE says.


The consequences of these so-called "higher standards" on the four and five years blessed to have come of school age during the Great Common Core Movement is predictable - they're stressed, full of anxiety and scared:

“For the most part, it’s way over their heads,” a Brooklyn teacher said. “It’s too much for them. They’re babies!”

In a kindergarten class in Red Hook, Brooklyn, three children broke down and sobbed on separate days last week, another teacher told The Post.

When one girl cried, “I can’t do it,” classmates rubbed her back, telling her, “That’s OK.”

“This is causing a lot of anxiety,” the teacher said. “Kindergarten should be happy and playful. It should be art and dancing and singing and learning how to take turns. Instead, it’s frustrating and disheartening.”


The DOE spokesperson was less than empathetic about the horrific consequences of the new Common Core on kindergartners:

DOE spokeswoman Erin Hughes said, “These are the types of activities and exercises that students need to work on to acquire the skills they need to be ready for middle school, high school, college and careers.”


Wow - this Erin Hughes person seems to have grown up under some similar kind of education system where getting along with others and learning the wonders of life were shelved in her kindergarten and replaced with physics and genome explorations.

Remember the Robert Fulghum book from years ago called "All I Really Need To Know I Learned In Kindergarten?

In that book, Fulghum wrote that every lesson that you really need from life is taught to you when you're in kindergarten:

Most of what I really need
To know about how to live
And what to do and how to be
I learned in kindergarten.
Wisdom was not at the top
Of the graduate school mountain,
But there in the sandpile at Sunday school.

These are the things I learned:

Share everything.
Play fair.
Don't hit people.
Put things back where you found them.
Clean up your own mess.
Don't take things that aren't yours.
Say you're sorry when you hurt somebody.
Wash your hands before you eat.
Flush.
Warm cookies and cold milk are good for you.
Live a balanced life -
Learn some and think some
And draw and paint and sing and dance
And play and work everyday some.
Take a nap every afternoon.
When you go out into the world,
Watch out for traffic,
Hold hands and stick together.
Be aware of wonder.

That's what used to be taught in kindergarten.

Now under the Gates/Broad/Murdoch/Obama/Bloomberg/Cuomo/Klein/Rhee/Duncan/Bush education reform movement, they don't teach any of those things anymore.

Instead they teach how to get an eating disorder or a drug habit or an alcohol problem or workaholism or a shopping compulsion or OCD or a sex addiction or neurosis or any number of other issues because your kindergarten years have had all the joy and fun taken out of them and have been replaced with high stakes testing, higher order math and language lessons, and cutthroat competition with your peers.

It's not a mistake that the same oligarchs who have brought this insane Common Core to fruition do not send their kids to schools that use Common Core.

They send them to Waldorf schools.

Or the Lab School.

You know, the kinds of schools that aren't run like army drill camps, where the teachers aren't graded using test scores, where the kids don't take high stakes standardized tests all throughout the year, where students get to explore meaningful subjects and lessons rather than endless test prep and drills.

The Common Core Federal Standards are tantamount to child abuse and we need to take the people promoting these things to court and charge them with crimes against humanity.

It's not a mistake either that the people who promote this abusive and authoritarian education system are the kind of people who would fail a standardized test based upon Robert Fulghum's book.

They never learned how to get along with others.

They always need to win.

They always need things their way.

They like to hurt people (or fire them publicly on TV.)

And they never clean up their own messes.

Fred Rogers is dead but I really wish he were around today so that he could take the lead in exposing these Common Core Federal Standards for the garbage they are.

And I believe he would do just that.

The Common Core as carried out by the NYCDOE is an abomination because we have a vindictive petty tyrant in charge of the city who wants to enforce compliance and obedience from the masses and thinks this kind of education system is the best way to do just that, but please know that the rest of the country is going to get similar treatment as these standards get implemented.

These standards are not meant to get kids up to speed with what they should really know.

These standards are meant to scare kids, parents, teachers and principals that what they're doing isn't good enough, that they need to work longer, harder and faster because omigod the Russians are beating us, er, I mean the Japanese are beating us, what I mean is, the Koreans are beating us, or the Chinese are...ah, screw it, SOMEBODY is beating us and we MUST take action to be Number 1 again!

The reality is, the only people who are beating us are the oligarchs and members of the 1% who have stolen most of the wealth in this country and now want the rest of it.

These wealthy, greedy oligarchs are using this education reform movement to educate the next generation of kids to expect to have to work longer and harder for less, to never get vacations or time off, to lead lives that are about drudgery and nothing else.

Most of all, these wealthy, greedy oligarchs want children to grow up rife with fear and anxiety, the earlier the better, so that they will grow into obedient and compliant adults, good workers who do what the bosses say and good consumers who buy what the advertisers tell them to buy.

As a side note, when you infuse a generation of children with the kind of fear and anxiety that the education reformers are infusing this current generation with, you are going to get a whole bunch of people with a lot of emotional issues that corporations can make a lot of money from - and I'm sure Big Pharma, the casino industry, the alcohol industry, the fast food industry, etc. are licking their corporate logos at that thought.

That's intentional on the part of the education reform oligarchs too - don't think they haven't thought that stuff through.

The only thing they like better than obedient workers is compliant consumers.

And so, I will say again, we not only need to kill the Common Core Federal Standards deader than a minimum wage hike in Mississippi, we need to take the people who promoted this crap - from the education think tankers who developed it and sold it to the politicians who put it into place to the education system functionaries who are carrying it out - and make sure they never get any power over anybody or anything ever again.

Because anybody who thinks four and five years need to learn permutations over sharing, test prep over play, and fear over wonder shouldn't be in charge of anybody or anything.


This is why parents, students and teachers are protesting.
Posted by reality-based educator at 10:49 AM